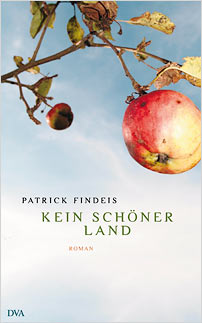 ‘No land more lovely’ is the first line of a German folk song celebrating the joys of rural life. In the case of this novel, the reference is ironic. Friedberg, a (fictional) village in Southern Germany, is a deadly place – a former farming community where the land has been sold off to developers, leaving only a pub, a gun club and a chapel. It, along with the neighbouring village of Rottensol are provincial hellholes that keep a stranglehold on their inhabitants, determined that they shall die where they were born. The story told is that of Uwe, recently deceased childhood friend of the narrator Olaf, and describes the unhappy family life to which he was condemned, his loneliness, his turning for comfort to the drugs that will kill him, and his only comfort, which was to look back on the happier times he spent with his grandmother. It is in the telling that this novel proves its power, its poetic tone and its power of hovering between intimacy and distance.

Patrick Findeis was born in 1975 and lives in Berlin. His early studies included comparative literature, psychology, and modern communications. He is also a graduate of the Leipzig Institute of Literature. For this, his debut novel, he was awarded with the 2008 3sat Literature Prize at the Klagenfurt Festival.

Deutsche Verlags-Anstalt has an outstanding reputation as one of Germany’s leading non-fiction publishers, with an emphasis on history, memoirs, biography and current affairs. DVA also has a fine list of literary fiction. Among its bestselling authors are Marcel Reich-Ranicki, Sebastian Haffner, Martin Doerry, Ian Kershaw, Anne Enright and David Wroblewski. Deutsche Verlags-Anstalt has been a part of Verlagsgruppe Random House since 2006.