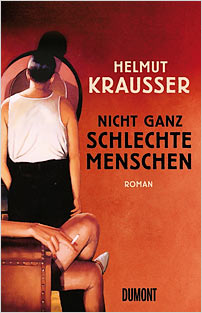 Karl and Max Loewe are political idealists. They are strongly opposed to the rising tide of European fascism and yet struggle to know how best to live in an age of violent political extremes. Both believe themselves to have clear ideas of right and wrong. But their experiences throughout the novel plunge them into a world of moral relativism in which they are revealed as no better or worse than the not-such-bad-people of the title.

The Loewe twins are born in 1915 into a superficially respectable bourgeois family. Their mother has a scrupulous sense of fairness which leads her, perversely, to lie to her sons that she does not know which of them came into the world first. Meanwhile, Theodor Loewe is a lawyer whose domestic life revolves around a ménage-à-trois with his wife and the boys’ nanny. Karl and Max Loewe are precociously intelligent, but their intellectual and political allegiances develop in different directions. Their responses to the sexual advances of their tutor at their Jesuit college are similarly divergent. Whereas Max embraces a life of bisexual adventure, Karl endeavours to sublimate all erotic desire into the pursuit of his political ideals.

Following their parents’ death, the twins move to Berlin, where Max takes up with a half-Jewish prostitute. He squanders his inheritance on a hedonistic life of drink, drugs and sex. Meanwhile, Karl is briefly incarcerated for his communist sympathies. The brothers move to Paris in order to escape national conscription. Krausser’s novel depicts their lives at the edge of a web of perilous intrigue of their own making. As the Nazi shadow grows and war begins to look inevitable, Max masterminds a plan to emigrate to America. On the eve of their departure the brothers celebrate in extravagant style with a trip to the races. But while they are there a spectator stand collapses, bringing the young lives of the twenty-five-year-old twins, and the novel itself, to a fittingly dramatic end.

The complex historical and political context of Krausser’s novel is brought to life by the light touch of his prose and his witty and beguiling characters.

Helmut Krausser, was born in 1964 and lives in Berlin. He is best known for his plays and novels, which have won him numerous grants and awards, such as the Literary Grant of Munich (1989), the Tukan Prize (1993) and the Grant of the Villa Massimo (1998/1999). His novels Der große Bagarozy and Fette Welt have been filmed.

DuMont Buchverlag was founded in 1956. Stressing the link between literature and art, the firm focuses both on these subjects and also, more recently, on general non-fiction. Its authors include John von Düffel, Michel Houellebecq, Helmut Krausser, Martin Kluger, Judith Kuckart, Thomas Kling, Annette Mingels, Haruki Murakami, Charlotte Roche, Edward St. Aubyn, Tilman Rammstedt and Dirk Wittenborn. The art list covers high quality illustrated books dealing with the periods from the Renaissance up to the present, monographs on single artists and overviews on contemporary Chinese art, as well as design, photography and art theory.