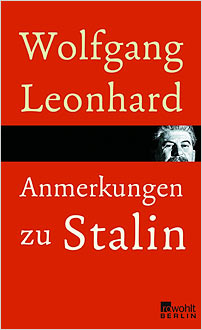 Wolfgang Leonhard is a former professor of Communist History and spent his youth in exile in Moscow, having fled Germany in 1935 with his Communist mother. He felt moved to write this book when it struck him that modernday Russia has rewritten the history of one of the 20th century’s most fearsome dictators, Joseph Stalin. A 2008 poll by a Russian state radio station revealed that Stalin was considered ‘Russia’s most significant historical personality’. Under Putin, the country’s History curriculum was changed to portray Stalin as a hero rather than a murderer. Leonhard puts this down to the collapse of the Soviet Union and Russia’s search for something to hold on to. As one of few remaining survivors of the Stalinist regime as well as an expert on the topic, he is well-placed to contribute to the debate.

Charting the rise and fall of Stalin, from the death of Lenin in 1924 to his own death in 1953, Leonard makes it clear that the book is not intended as a biography of Stalin, but rather as a summary and exploration of his regime. The book describes how Stalin catapulted himself to the top of the Bolshevist Party after Lenin’s death, thanks to his pragmatic approach and feeling for the public mood. Further stratagems included isolating and excluding rivals from the party, increasing bureaucracy to break the workers’ solidarity, and amending the basic tenets established by Marx and Engels.

Between four and seven million people fell victim to Stalin’s political ‘cleansing’ between 1936 and 1938 (including Leonhard’s own mother, who was banished to a prison camp): between five and ten thousand people were arrested in the Soviet Union each day and hundreds of thousands died. While the aims of Stalin’s terror were to annihilate his enemies and personal opponents, this practice eventually became an end in itself. This greatly weakened the Red Army, many generals with tactical knowledge being killed or imprisoned. Leonhard describes Stalin’s perplexity when Germany invaded the Soviet Union and his ultimate downfall.

If Stalin is declared a great leader nowadays, writes Leonhard, it is both an insult to his millions of victims and also a political danger for today. His points are argued with the passion of one who knew the Stalinist regime all too well, yet with the balance and lucidity of the academic he is.

Wolfgang (orig. Wolodja) Leonhard was born in 1921, the son of the Soviet ambassador in Vienna. Fleeing the Nazis, he lived in exile in Moscow from 1935. From 1943 he was a member of the National Committee for a Free Germany, an anti-Nazi organisation that operated in the Soviet Union during World War Two. In early May 1945 he returned to Berlin with the Ulbricht Group (a group of exiled German communists who played an important role in post-war work in Germany) and worked as a lecturer at the academy of the SED political party. After breaking with Stalinism he fled to West Germany via Yugoslavia in 1949. Since then he has been regarded as one of the leading experts in the West on the East, teaching for over twenty years as Professor of the History of Communism at Yale University.