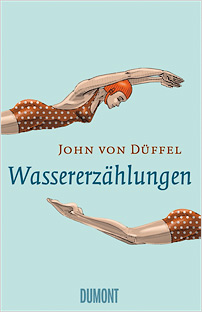 Water is the connecting theme in this elegant collection of eleven short stories. John von Düffel, a keen swimmer, has always been fascinated by water and it has featured in his novels as well as his non-fiction writing.

The book opens and closes with stark descriptions of a waterscape in winter. Other bodies of water here include a brackish woodland lake untouched by sunlight, where a mother-to-be realises the child she is carrying will not live; a swimming pool in a modernist bolthole where a young woman is employed to swim in beautiful, regular strokes, as a sort of human decoration; and the expanse of lake by a holiday resort where a poignant tale of father-son loves unfolds, seen through the too-appreciative lens of a neighbour’s camera. There is also a river running through a small town, passing under a bridge where a local teacher considers his young wife’s cancer; and an aquarium overlooked by a bench where a middle-aged woman used to sit with her children and where she now meets her illicit younger lover. In one of the collection’s two excellent monologues, the sea around the Faeroe Islands and Iceland, the waters of the Arctic Circle and the Norwegian Fjords feature in the cruise taken by a father trying to reconnect with his teenage daughter. And then there is the driving rain observed from the window of her apartment by a lonely woman who pretends to the delivery- and salesmen that she has a full and interesting life.

While some pieces in the collection are alive with the urgency of stories that must be told, others fizz with a wicked kind of humour, and still others stand out for their powerful descriptions of place or their poetic depictions of the hypnotic draw of the water. The stories share a sparkling narrative style and a beautifully handled delicacy in their subject matter. The vulnerable moments in marital and parental relationships; the many forms of loneliness or transitory self-doubt, despair or happiness in urban and rural settings; the myriad forms of stillness in nature or in the absence of someone in a room; outsiders; the loneliness of being together; exultation in a shaft of sunlight or the smell of home on linen taken on holiday; growing up and experiencing that first moment of weakness or vulnerability in one’s parents – the collection is a rich exploration of all these things, recounted by a master storyteller.

John von Düffel was born in Göttingen in 1966. He is dramaturg at the Deutsches Theater Berlin and professor for scenic writing at the Universität der Künste in Berlin. Among other awards, John von Düffel received the 2006 Nicolas Born Prize.