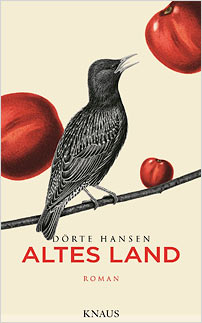 ‘Altes Land’ is a region of northern Germany known for its scenic waterways, fruit orchards, and half-timbered farmhouses. One such house, an imposing, centuries-old structure that has gradually fallen into disrepair, plays a central role in the novel. With its welcoming inscription, ‘This house is mine but not mine alone, it also belongs to the one who comes after me’, the house represents a site of refuge for the novel’s two protagonists, Vera Eckhoff and Anne Hove.

Vera first comes to the house in 1945 as a five-year-old refugee from eastern Prussia. She and her mother Hildegard are taken in by the house’s owner, Ida Eckhoff. Compelled by economic necessity to live together under a single roof, the two women clash immediately. The conflict escalates when Hildegard marries Ida’s only surviving son Karl, a soldier who has returned from the eastern front with considerable physical and psychological scars. Hildegard goes on to have an affair with an architect and leaves Karl and Vera to go and live with him. The adult Vera studies to become a dentist and returns to set up her practice in Altes Land, motivated by a mixture of loyalty to Karl and a stubbornness to prove her worth in an environment that has not always been welcoming to her.

Vera’s story alternates with that of Anne Hove. Anne is a young mother in present-day Hamburg, in a neighbourhood where young mothers walk their children to the park in expensive strollers, cappuccinos in hand, organic groceries in their shopping bags. When she discovers that her partner is being unfaithful, she flees with their young son to Altes Land, offering to oversee the renovation of her Aunt Vera’s dilapidated house in return for room and board. By the novel’s end Anne has regained her sense of self-confidence, while Vera begins to conquer her fear of emotional attachment and is no longer paralysed by her family’s past. Dörte Hansen interweaves the two protagonists’ stories with several subplots and an array of supporting characters who enrich the novel. Hansen has an impressive talent for characterisation, skilfully capturing the characters’ differing perspectives.

Old Country is an engaging read that chimes with the growing interest on both sides of the Atlantic in the experience of German civilian refugees at the end of the Second World War. It also reflects intelligently on the widespread phenomenon of a culture clash between long-time residents and wealthy newcomers in rural communities.

Dörte Hansen was born in 1964, learned several languages including Gaelic, Finnish, and Basque, and completed a PhD in linguistics. She then turned to journalism, spent several years working as an editor for NDR (Norddeutscher Rundfunk), and is now an author for radio and print. Altes Land is her first novel.