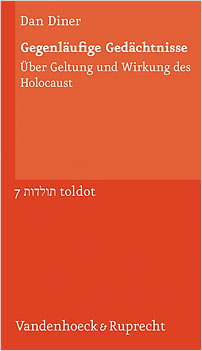 Most of us probably have one fixed idea about the Holocaust, depending on our age, nationality, and the circumstances in which its horrors were first made known to us. Few, therefore, are probably aware of the number of approaches to the subject there are. This book by Dan Diner, one of the most distinguished German-Jewish scholars in his field, elucidates the nuances of this historical paradox with magisterial clarity and breadth.

The first of his four chapters begins with an account of the reception of the Holocaust up to the present day. This is followed by a demonstration of how the memory of the Second World War on the one hand, and that of the Holocaust on the other, at times blanked each other out. Whilst at the height of the Cold War with Russia the Holocaust was still seen in the context of the war just finished, the emphasis had shifted by the beginning of the 1980s, causing the two events to be separated. Now, as anthropology replaces history, it tends to make the Holocaust just one among many atrocities, thus hindering the understanding of that event’s unique character.

From here the author passes on to the different European perspectives that existed even as the war ended – in the Anglo-Saxon world, in Russia and Eastern Europe, in the Baltic States and in Germany itself – and to the different reactions which the movement of events caused. As Russia became the tyrant, for instance, the attitude in the Baltic States significantly changed in Germany’s favour – just one striking twist among many in Diner’s book. Then comes a fascinating discourse on the French attempt to suppress the movement for independence in Algeria, during which even former victims of the Nazis were prepared to become torturers in their turn. This led of necessity to yet another view of the Holocaust. But Diner argues that the genocidal colonial wars are significantly different from the Holocaust, as the latter is destruction beyond war, conflict and opposition. A final chapter, no less thoughtprovoking, examines the link between an understanding of the Holocaust and secularization, with the consequent undermining of the Enlightenment’s trust in rationality.

No need to emphasise either the importance or the interest of this work. A fine and thought-provoking achievement.

Dan Diner has written and contributed in a major fashion to the field of history and Jewish Studies, from his PhD in 1973 to the present day. He is professor at the Universities of Odense, Denmark, Essen and Tel Aviv where from 1994 to 1999 he was also Director of the Institute for German History. Since 1999 he has been Director of the Simon Dubnow Institute for Jewish History and Culture at Leipzig University and is a member of the Philology and History section at Saxon Academy of Sciences, Leipzig. He holds a number of important editorships and is also Professor at The Hebrew University of Jerusalem.

Previous works include:
Publications on the history of the 20th century, the Near East and Germany, especially National Socialism and the Shoah. He has been published by, among others, C.H. Beck, Berlin Verlag, Propyläen, S. Fischer, Garzanti (Italy) and Berkeley University Press (USA). For a full list of titles please contact the editor.

Since 1735 the Göttingen firm of Vandenhoeck & Ruprecht, one of the oldest independent publishers still in existence, has been publishing academic literature and now issues over 250 new titles a year. The classical core of the list consists of academic works in the fields of theology and religion, history, medieval studies, philosophy and philology. Equally important is the firm’s developing range of practical, do-it-yourself titles – on personal development, psychological counseling, spiritual community work and much else, a conspectus that aims at being both useful and highly readable.