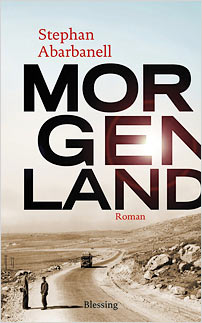 Orient is an ambitious and rewarding novel which describes the founding of the Jewish state and paints a vivid picture of war-torn Germany.

It is 1946 and the future of Palestine is uncertain. In Europe, hundreds of thousands of Holocaust survivors wait for visas to emigrate to Palestine, while the British continue to restrict immigration. Lilya Wasserfall is part of the Jewish underground resistance and is sent to Jerusalem in search of the missing scientist, Raphael Lind. There Lilya meets Lind’s brother, who gives her documents to prove that Raphael is still alive. She then embarks upon an incredible journey to find him, following a trail that takes her to London and all over Germany. She visits a camp for displaced persons in Bavaria, a US army archive full of books stolen by the Nazis, the ruins of Berlin, a Kibbutz in Germany for Jews preparing to emigrate to Palestine and, finally, Bergen-Belsen.

In each of these war-ravaged places Lilya picks up clues about Lind’s activities during the war. In London, while being tailed by the British Secret Service, she discovers that Lind’s research papers were published in England under another name during the 1930s. At the DP camp – which has developed into a kind of Jewish shtetl with Yiddish spoken on the streets, complete with synagogues and schools – she meets its American director David Guggenheim, and throughout the novel a relationship between them develops. The US army archive contains papers from Vilnius, and Lilya discovers that Lind spent time there during the war. She is urged to travel to Berlin to continue her investigations, where she finds out that Lind had been forced into research work by the SS, eventually working on a top-secret mission. It is assumed this was research into poison gas. In Berlin she also discovers that Raphael has a son somewhere – the result of a passionate affair with a Danish woman during the war. Finally, in the makeshift Kibbutz, Lilya finds somebody who knew Lind during the war, hiding him in the countryside so that he could continue his research on the use of gas in wartime. She learns that Lind was sent to Bergen-Belsen and travels there to visit the survivors’ hospital, eventually finding Lind, who has amnesia and does not know who he is.

When all the strands of this magnificent story are finally brought together it turns out that Lily’s beloved David Guggenheim is in fact Lind’s long-lost son.

Stephan Abarbanell was born in Brunswick in 1957 and grew up in Hamburg. He studied protestant theology and general rhetoric in Hamburg, Tübingen, and Berkeley. Abarbanell currently oversees cultural affairs at rbb Broadcasting. Orient is his first novel.