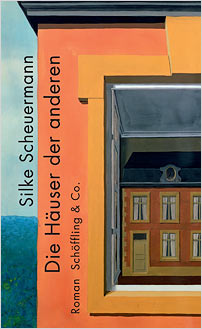 If there are any genuinely content people living in the well-kept suburban street which forms the focus of Silke Scheuermann’s novel, we don’t get to meet them. At first sight everything seems new, clean and calm, but a closer study reveals a complex microcosm whose troubled inhabitants are all wrestling with the question of what it would take for them to be happy.

The novel’s central characters are Luisa and Christopher, a married couple in their thirties whose lives are turned upside down when their eight-year-old niece spends the summer with them. We also meet a gay couple in their fifties who delight in making the lives of other tenants in their apartment block miserable. The neighbourhood’s other residents include a widow on the verge of alcoholism, and an ambitious cleaning lady whose daughter is dating the drug addict son of her wealthy employers. The narrative is principally set in Frankfurt but with excursions to Venice and New York.

Other People’s Houses is a well-written and keenly observed journey behind closed doors and into other people’s lives. Its unsentimental and insightful characterisation makes for a convincing and thought provoking documentation of modern life.

Silke Scheuermann was born in 1973, and now lives in Offenbach. She studied Drama and Literature in Frankfurt, Leipzig and Paris. Her poems, short stories and novels have been translated into various languages and have been awarded numerous grants and awards.

Schöffling & Co. has a simple credo: the focus is on the authors. It has gained the reputation of being a ‘publishing house that plays a significant role in the shaping of Germany’s literary future’ (SPIEGEL online).