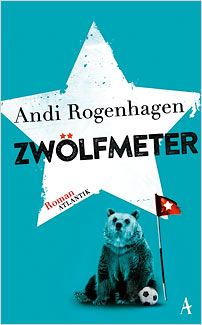 Penalty Shoot-Out, the second novel by Andi Rogenhagen, is a revitalising story of personal and social triumph against all odds. The novel tells the story of nineteen-year-old sign painter Bernd Stühler, living in the tiny East German village Klein Körschow with his parents and brother Tobi in 1979.

Born on the exact day the German Democratic Republic was founded, Tobi is an immense football talent with realistic hopes of playing in the big leagues. Then, at age nineteen, he is hit by a car on his way to try-outs for the local football team, sustaining severe brain damage. Bernd, who has always looked up to his older brother, steps in and trains hard to live up to his brother’s potential, eventually being offered the chance to try out for the local football team.

This achievement coincides with preparations for the thirtieth anniversary celebrations of the founding of the GDR. Bernd suggests to his coach that the local team play a friendly game against a Soviet army team, with his ulterior motive being to pay a fitting tribute to his brother: at a critical moment in the match, Bernd plans to have his brother step in and play for him. With Bernd’s assistance, Tobi practises shooting penalties.

In the meantime, Bernd and his girlfriend of five years Gabi get engaged and plan to marry after the great match. They view an apartment together and Bernd, quite unexpectedly, falls in love with the woman who shows them around – Susanne. Bernd and Susanne begin a passionate affair, which is further complicated by the fact that Susanne’s husband has been sent from Berlin to teach Bernd how to throw the match – the Soviets are supposed to win to save face after a brawl during a warm-up match. Bernd is in a dilemma: if he throws the match, Tobi cannot kick the winning goal.

In the final match Tobi does indeed get a penalty shot, giving him the victorious pleasure of scoring a goal and winning the match. Bernd chooses true love with Susanne over his expected marriage with Gabi, and flees to Berlin in search of her.

The clean prose is gripping and suspenseful, with a wonderful amount of satire and humour at the expense of the GDR way of life. Penalty Shoot-Out pulls the reader through its pages at breakneck speed and creates feelings of great warmth for its characters.

Andi Rogenhagen was born into the sadness of the 1960s. His debut novel Heldensommer and his most popular film Ein Tick anders were released in 2011. The Grimme award winner lives in Bochum with his wife, two children, and two rabbits.