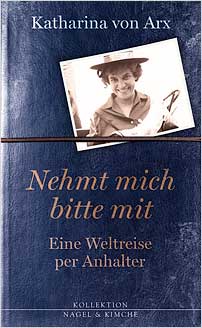 Sixty years ago, a young Swiss woman took the travel writing scene by storm. Describing her travels from Zurich, via Vienna and Trieste to Bombay, Tibet, Japan, Bangkok, China and New York, before finally returning home to Switzerland, her account was not the journey of an intrepid adventurer to the world’s most inhospitable places. But Katharina Von Arx (1928-2013) travelled with little more than her ukulele and a set of drawing materials to finance her way around the world. The ‘hitchhiking Swiss miss’, as the Los Angeles Times neatly described her, travelled in the spirit of her compatriots Ella Maillart and Annemarie Schwarzenbach to capture the aesthetics of the foreign as the world began opening up to foreign tourism in the 1950s. Unselfconscious and unconventional, von Arx’s first book Nehmt mich bitte mit: Eine Weltreise per Anhalter (‘Please Take Me with You: A Hitchhike Around the World’) describes her travels through India aged just twenty-five. Von Arx learns Bengali (while teaching doubtless bemused locals some Swiss German), lives briefly on a houseboat in Kashmir, visits an opium den in Calcutta and sings Swiss cradle songs for Indian radio, before moving on to Japan, with its stiflingly neat gardens, and finally to the exuberantly generous people of New York. On the way she negotiates a series of awkward and, by modern standards, downright dangerous encounters, often with foreign men, that highlight her mulish determination to succeed, coupled with a thirst for adventure.

While Nehmt mich bitte mit is characterised by irony and humour in equal measure, it also offers a serious contribution to the history of women’s travel writing. It is, essentially, a feminist experiment in overcoming the dictates and mores of middle-class society in the post-war years. It demonstrates how, with extremely limited means but plenty of savvy, a woman could travel unchaperoned and explore with relative freedom hitherto still largely ‘foreign’ peoples, places and customs, through the decidedly non-touristic perspective of the everyday, the domestic, even the humdrum. Von Arx’s account includes a fair portion of self-reflection on herself as a travelling woman, a strange creature in trousers – ‘ein merkwürdiges Geschöpf in Hosen’. But it is just as revealing about her self-portrayal as a young Swiss woman journeying through a post-war world in which old hierarchies have been destabilised and new identities are being formed. Her account of the house where she stayed in Uttar Pradesh that belonged to the Nawab of Rampur emphasises how heavily Indian society was still influenced by British forms of politeness, and how much its buildings owed to European interior design and architecture. Set against this is the image of the Nawab’s daughter, schooled at an American convent in Darjeeling, for whom ‘invisibility’ in her father’s household and arranged marriage are the accepted norm. Women travelling veiled ‘in purdah’ to avoid the male gaze represent the polar opposite to von Arx’s largely untrammeled voyaging spirit to which seeing and being seen are central.

Nehmt mich bitte mit not only marks an important moment in the history of travel writing, it also reveals a pivotal point in the consumption of travel literature by a European audience. The tourist destinations that von Arx describes with such enthusiasm would barely cause a modern audience to raise an eyebrow. In an age when TripAdvisor can inform us at the click of a button about accommodation, sights, food or medical care in the furthest corners of the earth, it is precisely von Arx’s energetic description of what must have seemed then so foreign, so striking and so exotic, that brings Nehmt mich bitte mit to life. This makes this book such an important snapshot of the practices of foreign travel and the possibilities it offered, before these became subsumed into the impersonal leisure and tourist industries of today.

The re-edition of this book by Nagel & Kimche for the Hanser press is timely. Accompanied by von Arx’s original quirky illustrations and a perceptive epilogue by literary critic Martin Zingg, which investigates her narrative strategies, it offers a lively and vibrant picture of a new phase in the practice of travel.