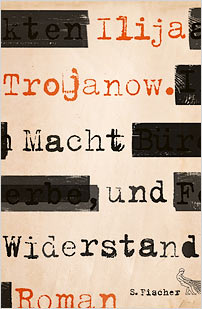 Power and Resistance is a brilliantly written tour de force which offers unique insights into the way of life under a totalitarian regime.

Set in Bulgaria between 1944 and 2007, this is the story of a battle between two men and two different versions of history. Konstantin Scheitanow, born a doctor’s son in 1933, is a charismatic and unyielding anti-Communist revolutionary, an anarchist and resistance fighter. Metodi Popow, a few years older and from the same town, is a government spy, officer and camp director. Metodi is Konstantin’s enemy throughout the novel. Born into poverty and a half-orphan, Metodi has an opportunism that seems to be rooted in a sense of powerlessness as a child.

Throughout his political career, the mediocre Metodi never thinks through substantial questions, but worries mostly about how to sound (not too smart, yet not too deferential) and how to get noticed by those in power. Metodi never gets his hands dirty but is always there at the margins, willing to serve in exchange for some attention from the bosses. Konstantin, on the other hand, is singled out for asking too many critical questions while he is still a teenager. He gets expelled from the youth club and the secret service puts him under surveillance. Konstantin is imprisoned for eighteen years after he blows up a massive bust of Stalin in one of the city’s parks in 1953 (following Stalin’s death), at the age of twenty. While in prison he is interrogated and tortured by Metodi, who never succeeds in getting any information out of him, the most principled of prisoners.

When a young woman called Nezabrawka appears who claims to be Metodi’s daughter – conceived in a women’s labour camp at a time that Metodi cannot seem to remember – Metodi is intrigued and cannot resist meeting her. Their conversations are the closest Metodi gets to accounting for his life. Metodi does his own research and finds that he had indeed raped Nezabrawka’s mother in a camp.

After Bulgaria transitions to democracy, there is a prevailing sense that things have not really changed and that the ruling elites remain in power. Trojanow’s fascinating protagonists continue to embody the conflicting ideologies right to the end of this powerful novel.

Ilija Trojanow was born in 1965, and has lived in Nairobi, Munich, Bombay, and Cape Town. Today he resides in Vienna. He has received numerous literary awards, including the 2006 Leipzig Book Fair Prize for his novel Der Weltensammler, as well as the 2009 Prize of the Literature Houses.