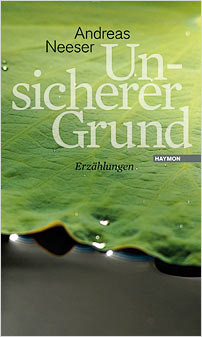 Caught between powerful memories of the past and the opaque promise of potential futures, the characters of the eight pieces making up Precarious Terrain are both isolated and unsure how to negotiate their world of possibilities – a world of memory, regret, daydreaming, hallucinations, flashback, and puzzled introspection. The image of the heart runs through the stories, underpinning the leitmotif that constantly asks how we might live with the threats of danger and death while walking on shaky ground.

Settings are mainly urban, but it is the inner world and the senses that are more frequently exploited. Neeser’s prose is tactile and sensual; most stories focus on sight, sound or smell, with touch and taste being secondary. The physical side provides a balance to the stress on interiority and feelings of uncertainty. In “From Window to Window”, an example of particularly tight structure and plot, Jonas, a sensitive, angry teenager, murders a neighbouring butcher who has antagonised him by making love to his widowed mother in the next room. This strand of the story is interspersed with a second one. Later in time, a real estate salesman is selling Jonas’s apartment to a woman, and they discuss knifings by teenagers, among other things – all relevant to Jonas’s agony. The narrative structure thus cleverly sheds a broader light on Jonas’s psyche and acts as a distancing commentary. The build-up in tension as the boy suffers some of the pains and humiliations of puberty and a devastating “family” situation is particularly well crafted.

Throughout, Neeser’s terseness succeeds brilliantly. His style is cogent, spare, and elliptical, not leaving much that is extraneous or superfluous. His frequent brief word clusters and incomplete sentences make for tight paragraphs; there is good alternation between long and short sentences and paragraphs, and his abrupt endings always work. Neeser provides and develops a central image in every story, deftly tying together inner troubles with concrete externals. And his precision is combined with references that the reader must search to unravel in the same way that the characters do: working to find sense in uncertainty.

A refreshing and challenging collection.

Andreas Neeser was born in 1964 and now lives in Suhr near Aarau in Switzerland. Since September 2003 he has been Director of the Aargauer Literature House ‘Müllerhaus. Literature and Language’ in Lenzburg. He has won numerous prizes and scholarships, including a residency at the Zuger Kulturstiftung Landis & Gyr in 2009 (see NBG 27).

Haymon Verlag was established in 1982 by the historian, journalist and author Michael Forcher as a non-fiction publishing company. The Haymon Verlag is named after the ‘Giant Haymon’ who, according to an old legend, founded the Stift Wilten monastery near Innsbruck in the eighth century. It was one of the first cultural centres in the region that later became known as the Tyrol. Since 1988, it has primarily published German-language and international literature. Haymon Verlag has been a subsidiary company of the Studienverlag since 1 September 2004.