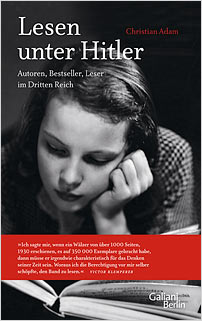 Adam has produced a thoroughly absorbing account of the manner in which the Nazis handled what was for them, as an authoritarian regime, the highly problematic area of writing and literature. Topics ranging from censorship and propaganda to the promotion of the Nazi ideology are handled in a most accessible and interesting way.

Setting out to give an insight into all aspects of literature in Germany under the Third Reich, the author describes in detail the regime’s attitude towards and policy on writers and their works, as well as the effects of National Socialist legislation on the writers themselves. The study begins with accounts of the book burnings in early 1933 of works by authors deemed to be antipathetic to the New Germany, or of works by ‘non-Aryan’ authors. The various organs within the government that were responsible for different aspects of literature and that were the main means of censorship in the period are comprehensively explained. This includes in particular the Reichsschrifttumskammer, the organisation set up by the Nazis to which all writers were obliged to belong if they wanted to be published, and from which any dissident or undesirable authors could be excluded.

All the many categories of literature, not just novels, are covered and analysis offered on how they fared during the twelve years of the Third Reich. The circumstances of the many major German writers like Thomas Mann, who chose to or were obliged to leave the country in 1933 because of their political opposition to the new regime or because they were Jewish, are also dealt with. All the bestsellers of the period are discussed, not excluding works by prominent members of the Party themselves; Hitler’s Mein Kampf sold an astonishing 12,500,000 copies and Alfred Rosenberg’s Der Mythus des 20. Jahrhunderts over 1,300,000. The popularity of various genres of literature in Germany at the time, such as the detective novel, the war novel and the surprising attraction of the Wild West novel, is explained, and their authors discussed. An appendix lists the period’s bestsellers.

This thoroughly researched book will appeal to all those interested in literary history and the history of the book, as well as in this particular period of European history and in the workings of totalitarianism. Students and researchers wanting to gain additional insight into the functioning of the Nazi government machine will find much of value.

Christian Adam studied German Literature and Journalism at the Free University of Berlin. Since 2007 he has been working for the Federal Commissioner for the Records of the GDR Ministry for State Security (Stasi) in Berlin, where he is Head of First Releases.

Galiani Berlin is the new imprint under the roof of Kiepenheuer & Witsch, established in 2009 by Wolfgang Hörner and Esther Kormann – the creative minds behind the programme. They publish a mixture of literature, classics and narrative non-fiction in hardcover format only. The imprint is named after Ferdinando Galiani: a true genius who was interested in everything around him, innovative, unpredictable and never boring. This reflects the path that Wolfgang Hörner and Esther Kormann are following with their new imprint. Authors include Helen FitzGerald, Linus Reichlin, Karen Duve, Jan Costin Wagner and Martin Urban.