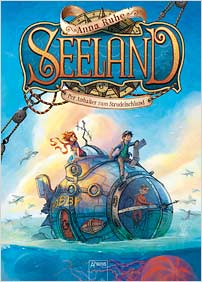 Anna Ruhe’s talented debut is an adventure story that pushes the boundaries of the imagination and leaves readers eager to return to her enthralling underwater world.

Max’s father was a famous scientist who disappeared years ago. When Max decides to leave his quiet home town and go in search of him, he has no way of knowing where his journey will take him. Max follows his companion – the independent and adventurous Emma – down a well, where they are sucked into the depths by rapids and deposited in a world they never knew existed. Sealand is populated by people and magical beings perfectly adapted to their subterranean environment, living in cities where life carries on both above and below water. Max finds out that his father discovered a gateway to another world, but refused to relinquish his knowledge to the powerful Schaar – a secretive leader or group of leaders who are controlling Sealand with clouds of debilitating white mist. Many other people have also disappeared without trace.

On their way to visit Sealand’s ancient library, where centuries-old mermaids guard the world’s knowledge, Max and Emma encounter Ari, another boy in search of his lost family, who offers them a lift in his submarine. After thwarting a band of underwater pirates and piecing together a series of enigmatic clues they manage to identify the likely place where all kidnapped Sealanders are held. They visit a high security prison where the inventor of the white mist is held captive, his own mind clouded by the toxic mixture. After braving the deepest, most dangerous waters of all, at the end of their oxygen supplies and having survived the grasp of python-like killer jellyfish as well as shoals of warrior fish, their submarine runs aground in the Schaar’s headquarters. Max finally meets his father and manages to disable the mist-producing machinery.

Sealand is richly imagined and full of brilliant details which allow readers to revel in a fantasy land where people and mermaids live together. Ruhe balances lively dialogue with engaging prose to paint a picture of a world that is both believable and utterly compelling. The extraordinary subterranean realm is brought to life even more vividly through the book’s delightful illustrations and detailed maps which help the reader keep track of Max’s adventures. Its accessible, fast-paced narrative will have even the most reluctant readers hooked.

Anna Ruhe was born in Berlin in 1977. After a detour to the English coast, she financed her graphic design studies by working as an assistant photographer. Since then she has worked as a corporate designer and co-founded a software company. She has always had exciting stories in her head and started to write them down after her two children were born. She and her family make their home in Berlin. Sealand is her debut novel.

Max Meinzold was born in 1987 and is a freelance graphic designer and illustrator. specialising in science fiction and fantasy as well as children’s and teen literature. He has been nominated for numerous awards. He lives and works in Munich.

Arena Verlag was founded in 1949 and is one of the most important publishers of books for children and young adults in Germany. They publish a broad range of titles in their fiction and non-fiction lists, including titles for all age groups – from toddlers to young adults. Arena was the first German children’s book publisher to start a paperback programme in 1958. Arena books have won numerous awards and been translated into many languages. They are also the German home of such internationally renowned authors as Cassandra Clare, Roderick Gordon and Brian Williams, Tove Jansson, Steve Augarde, Neil Gaiman and Jo Nesbø.