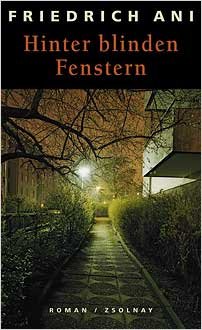 This follow-on to Friedrich Ani’s highly praised 2006 crime thriller Idylle der Hyänen is a tense and thought-provoking read. The lead detective, Chief Police Inspector Polonius Fischer, is an intriguing character in himself: a former Benedictine monk who has returned to his previous profession after experiencing a crisis of faith. Now he is investigating the sordid death of a local businessman found bound to a cross in the back room of Club Dinah, a brothel. The club owner and prostitute, Clarissa Weberknecht, claims the death was accidental on account of the man having taken risks and ignored the ‘rules’. Yet Fischer is struck by her hardened manner behind which he is sure a darker story is lurking. The murder is the first of a series of incidents which all seem to lead to the same grey and sombre apartment block in the Munich suburbs, the lives of whose residents the book covers in some detail. One of these is a pathetic yet eerily threatening sixty-eight-year-old former detective who was once a client of Clarissa’s and took part in her domination acts; another is the founder of a sinister residents committee and son of a prominent former member of the Stasi.

With its exploration of the moral issues of surveillance (on which one of Polonius’s colleagues contributes a most splendid and eloquent diatribe, aimed particularly at London) and its examination of society’s motivations towards crime and violence, along with a compelling detective figure, this novel is spot-on and would hold its own on the crime shelves anywhere.

Friederich Ani was born in 1959 and lives in Munich. Four of his novels featuring Dectective Tabor Süden won the German Crime Novel of the Year award. His first novel featuring Polonius Fischer (Idylle der Hyänen, Zsolnay, 2006) received the prestigious Tukan Prize of the City of Munich for Best Novel of the Year and prompted critic Tobias Gohlis of Die Zeit to hail Ani as ‘one of the best crime writers of today.’