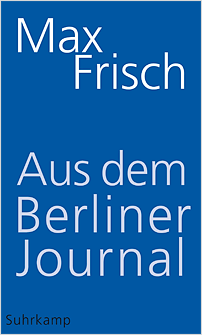 Swiss author Max Frisch is one of the most important European writers of the past century. His diaries were published after his death in 1994, but he barred the Berlin Diary from publication until twenty years post mortem. Frisch admitted that he felt ‘shame, a sign that I am already thinking of my future readers’ while writing it, and consciously imposed a kind of self-censorship as a form of self-protection – as well as in consideration of those who feature in the diary.

The journal was written between 1973 and 1980, when Frisch resided mainly in Berlin. Many entries reflect on the divided city and the tensions between the GDR and the West. As a famous Swiss citizen, Frisch was able to visit colleagues (Christa Wolf, Jurek Becker, Wolf Biermann) in the East quite freely. We read about his friendship with Günter Grass and Uwe Johnson, about the everyday problems of moving house and about his private relationships.

There are numerous reflections on ageing, and at sixty-two, Frisch already gives the impression of an old man reflecting on his life and diminished future options – a kind of stocktaking – although he went on to live another eighteen years.

The entries are not just notes of daily observations, but well worked-through pieces of literature, some of which have found their way into later published works, such as Montauk. The question ‘who am I?’ that is often explored in Frisch’s novels (Gantenbein, Stiller) appears as an intrinsic part of the man himself. There is always a ‘meta-level,’ a self-questioning, a detached viewpoint from an assumed ‘outside,’ as well as undiluted, forthright emotions.

The book is fascinating for everybody with an interest in German literature of the twentieth century, not just in regard to the personal and private thoughts of the author and his ever relevant works, but also in historical terms. It contains, among other issues, the writer’s view of a Berlin entrenched in division and how the intellectuals on both sides of the wall coped with it. The editor Thomas Strässle has also written an informative afterword, together with ample annotations.

Selections from the Berlin Diary is many-faceted on a personal, literary and historical level and is a document not only of Frisch and his life, but of the vitality of the European literary scene during this period.

Max Frisch was born in Zurich in 1911 and died in 1991. He commenced his studies in German language and literature at the University of Zurich in 1930, but financial difficulties forced him to drop out in 1933 after the death of his father. He worked as a correspondent for the Neue Zürcher Zeitung. His first book was published in 1934, and numerous publications followed – with a particular emphasis on the diary form.