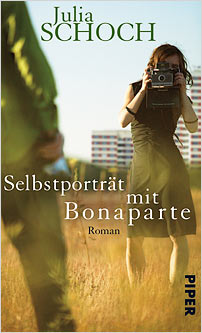 The young narrator of Self-Portrait with Bonaparte is trying to come to terms with the end of a formative relationship. Julia Schoch takes us on an enjoyable and engaging voyage of personal discovery which addresses some of the major questions raised by twenty-first century living.

The relationship between the narrator and the man she refers to as Bonaparte was over before the novel began. Unable to understand what their connection has meant for her, the narrator begins an inventory of the times they spent together, assembling her memories and mining them for significance. The couple met at a conference in Berlin at the start of the new millennium. She is a freelance photographer, he is a PhD candidate, and they soon discover a shared interest in gambling, and particularly roulette. She is drawn to the numbers and repetition whereas he enjoys the chance and risk-taking. Bonaparte seems to become more distant as their relationship progresses, so that the narrator’s memories of him are reduced to brief glimpses of visits to casinos, romantic dinners and being in bed together.

There are so few tangible reminders of Bonaparte that at times he seems to exist only in the narrator’s memory. Instead of love letters, she is left with a casino membership card numbered 688, which reappears throughout the story as one of the few remaining physical connections to their relationship. The narrator’s self-reflective discoveries serve as a mirror for those of her generation, attempting to make sense of a world that seems to be speeding up and yet going nowhere. We are given a sense of the duration of the relationship through the world events which have elapsed while the couple were playing roulette. These include the end of the war in Iraq and the beginning of the war in Afghanistan, Putin being elected as president of Russia three times and the fall of the Euro against the dollar. The repeating events are like the circular movements of the roulette wheel and suggest the futility of looking to the past for answers. With this motif Schoch knowingly calls into question the entire premise of the novel, in which the narrator painstakingly seeks to analyse her own recent past.

Schoch writes in a dreamlike style which is ideally suited to the novel’s subject matter. The narrative moves quickly between the literal and the metaphorical, so that the storyline is interspersed with reflections on the nature of memory, time and love. This is a perfectly pitched novel.

Julia Schoch was born in Bad Saarow in 1974. She studied in Bucharest and Paris and now lives in Potsdam, working as a freelance author and translator. Her highly acclaimed debut, Der Körper des Salamanders, a collection of short stories, won her numerous prizes, including the Friedrich Hölderlin Stipend and the Annette von Droste Hülshoff Prize. Her last novel, Mit der Geschwindigkeit des Sommers, was shortlisted for the Leipzig Book Fair Award 2009.

Piper Verlag was founded by Reinhard Piper in 1904. The firm published many leading contemporary authors, a tradition followed by his son and his grandson. After 1945 the programme expanded to include philosophy and non-fiction. Piper Verlag is well known for its lists in German and international fiction and non-fiction. Authors published by Piper include Ingeborg Bachmann, Sten Nadolny, François Lelord, Arne Dahl, Hape Kerkeling, Sándor Márai, Paul Watzlawick, Markus Heitz and Ferdinand von Schirach. Piper Verlag has been part of the Swedish Bonnier Group since 1995. In 1996 the Piper publishing group acquired the imprint Malik Verlag (literary travel writing, adventure, mountaineering), and now also publishes high quality fantasy.