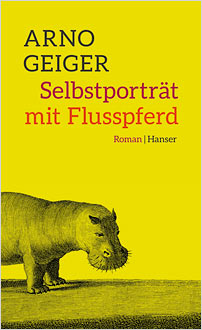 Self-portrait with Hippo is a beautiful coming-of-age story, set in Vienna and packed with astute observations of modern, urban life.

A chance encounter with his ex-girlfriend takes Julian back to the summer they split up, ten years ago. Although the break-up was originally his idea, he drifts through the first weeks of summer feeling miserable and heartbroken. An old friend, Tibor, suggests that Julian takes over his job for a couple of weeks while he goes on holiday, to help Julian earn some money and take his mind off the break-up. Tibor has been looking after a pygmy hippo belonging to Professor Beham, a wheelchair-bound old man in the last stages of a terminal illness. The hippo’s days in Professor Beham’s garden are numbered too, as the professor cannot heat its enclosure over the winter. It will be placed in a zoo as soon as the weather turns. The last member of this temporary household is the professor’s complicated, hottempered daughter, Aiko, who has returned from Paris to stay with him. Julian finds himself falling in love with Aiko and they enjoy a brief, intense affair.

Autumn is approaching, heralding the time when Julian will have to return to university, Aiko to Paris, and the hippo to the zoo. Just before she leaves, Aiko reveals she is pregnant, although she doesn’t know whether Julian is the father or if she wants to keep the baby. As Julian digs over the hippo’s old enclosure in the professor’s garden, he decides to go after her and try to make their relationship work. The novel explores themes of displacement, death, change and renewal, and Geiger’s lightness of touch enables these elements to float to the surface in beautifully drawn vignettes. His descriptions of the hippo going about its daily routine and fulfilling its animal needs in the middle of the household’s emotional turmoil are particularly compelling. It eats, sleeps, and spends several hours a day ‘marching up and down the bottom of the pond’, but it also has its individual quirks: it loves hearing familiar voices and gallops up to the fence to listen to conversations. There are plenty of unanswered questions: will Aiko go through with her pregnancy? Whose baby is it? Did she have an affair with Tibor? Like the hippo, the human characters have their own mysterious lives that the reader doesn’t get to see, which makes the novel all the more intriguing.

Arno Geiger was born in 1968 in Bregenz and lives in Vienna. Previous publications at Hanser include the novels Es geht uns gut (2005), and most recently, Der alte König in seinem Exil (2011), which has been translated into numerous languages and will soon be published in English. His work has won him the Friedrich Hölderlin Prize (2005), the German Book Prize (2005), and the Johann Peter Hebbel Prize (2008).