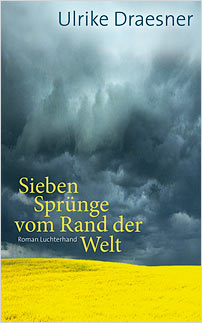 Seven Leaps from the Edge of the World is a truly epic work of historical fiction in which Ulrike Draesner deftly employs the viewpoints of characters spanning four generations and two countries (Germany and Poland) to paint a complex and moving tale of war and its devastating legacy.

Beginning in the present day, the reader is introduced to Eustachius Grolmann, an internationally renowned neuroscientist who has spent his life studying the great apes, his daughter Simone (also a primate researcher) and his granddaughter, Esther. The Grolmann family’s individual and collective experiences reveal how the trauma of World War II has infected each generation like a virus. The novel investigates the phenomenon of shared memories of trauma and Draesner shows how primate research has illuminated relevant patterns in human behaviour. The Grolmann family’s traumatic memories stem from events that took place during their forced displacement and resettlement from Oels in Lower Silesia (now part of Poland), to Bavaria. In the course of their flight in April 1945, Eustachius’ mentally and physically handicapped brother, Emil, disappeared and the various family members recall the time before, during and after this turning point. Emil’s fate slowly comes to light as each of the others recounts what they had to do to survive both emotionally and physically.

The novel offers a nuanced view of human relationships, showing how – regardless of whether or not they are professional researchers – the characters are constantly observing their interactions with other family members. In their efforts to make sense of their traumatic past they test the limits of their relationships with one another and puzzle over the resulting emotional responses.

Seven Leaps from the Edge of the World is a compelling, all-consuming read. Draesner is able to describe the most harrowing scenes of war, flight, deprivation and desperation in such a way that you almost can’t bear to keep reading, while the poignant beauty of her prose compels you to do so. The author’s roots as a poet are evident not only in her use of descriptive language, but also in her experimental configuration of the lines of text on the page in order to distinguish the different narrators’ voices and to map the process of recollection.

Ulrike Draesner was born in 1962 and works in Berlin as a lyricist, novelist and essayist. She studied English, German and philosophy in Munich and in Oxford and has worked as an academic, translator and editor. She has received numerous awards for her work, including the Hölderlin Förderpreis, the Preis der Literaturhäuser, and the Solothurn Literature Prize.

Luchterhand Literaturverlag was founded by Hermann Luchterhand in 1924 and has been publishing literary titles since 1954, an early and triumphant success being Günter Grass’ novel Die Blechtrommel (The Tin Drum, 1959). Its list includes literary fiction and poetry as well as definitive editions of selected writers’ complete works. In 1997, the firm was voted Publishing House of the Year by the German trade journal Buchmarkt. It is now part of the Random House Group. Authors include Christa Wolf, Ernst Jandl, Pablo Neruda, António Lobo Antunes, Will Self, Frank McCourt, Hanns-Josef Ortheil, Terézia Mora and Saša Stanišic.