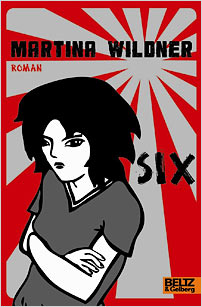 Luzie Lindlach leads a perfectly normal life in a perfectly normal Bavarian town. She and her parents share a house in the grounds of the boarding school where her father holds the job of caretaker. Luzie’s sister, Almut, dropped out of school and moved to Berlin to form a rock band, and has just returned to a rented bed-sit close to home. But Luzie is the opposite: sensible and hard-working, if lonely. The nearest she has to a friend is the rather strange Konrad, a pupil at the school. And, until now, the only event of note in her life is the fact that she lost a finger in an accident the previous summer.

On the first day of the new school term, however, as she is helping her father to mow the lawns, she finds something odd in the undergrowth: a glove with six fingers. Then she discovers a home-made manga (named, spookily enough, Six) among Almut’s belongings. The manga is set on the planet Roku, where all the people have six fingers. Luzie is therefore shocked and scared by the parallels, and everywhere she looks she finds the number six. Is someone trying to give her a secret message? Then a new pupil appears at the school. Nelli has six suitcases, wears sunglasses day and night, and bears a remarkable resemblance to Nana, the girl in the manga. She sits next to Luzie and, despite the latter’s initial reserve, they form a strange friendship with distinctly lesbian elements. But when she discovers that Almut was stalked in Berlin, she comes to the conclusion that Nelli is the stalker. Or could it be RoXane from the planet Roku, sent to destroy the earth with radioactive beams? When Almut decides to return to Berlin, Luzie is determined to follow her in order to save her life.

In one way this is a coming-of-age novel: Luzie is discovering herself and her sexuality. In another, it’s a story about family life, in another about Luzie’s self-image, and how her lost finger makes her feel like an outsider. And, finally, it’s a story about girls’ friendships and the less pleasant aspects of school life. One thing we can feel certain of: Luzie is not just having a nervous breakdown. Thoughtful teenagers will decide on the truth for themselves.

Martina Wildner was born in southern Germany in 1968. After a few semesters of Islamic studies in Erlangen, she switched subjects and ended up getting a degree in graphic design in Nuremberg. She lives and works as a freelance artist and author in Nuremberg. Liebe Isolde (‘Dear Isolde’) was her first novel. For her second, Jede Menge Sternschnuppen (Shooting Stars Everywhere), she received the important Peter Härtling Prize.

Beltz & Gelberg was founded in the 1970s and is now the children’s book division of the Verlagsgruppe Beltz. Its list consists of literary novels for children and young adults but also picture books and biographies for readers of all ages. Authors include Klaus Kordon, Charlotte Kerner, Peter Härtling, Christine Nöstlinger, Dieltof Reiche, Simone Klage and Janosch. A paperback list was introduced in 1986.