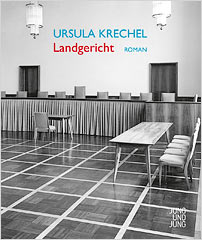 State Justice tells the story of a German-Jewish lawyer who is forced into exile in Cuba to escape the Nazi regime. Krechel’s narrative effortlessly interweaves historical fact with imaginative fiction, her meticulous research never detracting from the heartrending story of personal and professional loss.

Richard Kornitzer was a young, up-and-coming lawyer when the National Socialists ended his career in 1933. The novel opens in 1948, when Kornitzer, now in his mid-40s, has returned to Germany from Cuba and is beginning to piece his life back together. As a victim of racial persecution he is entitled to participate in the reconstruction of Germany, and on his return to the French Zone is appointed as a judge at the Regional Court in Mainz. Although the French have annulled the worst Nazi laws, the old legal system remains, and Kornitzer’s post-war colleagues served as lawyers and judges during the Third Reich. He remains forever the outsider, obliged to work within the very legal system and mentality that has previously rejected him as a Jew.

Kornitzer’s private life is equally strained. His wife Claire stayed in Germany during the war and was persecuted and sexually molested by the Gestapo after refusing to divorce her Jewish husband. After the war, the couple attempt to find their way back to each other, but settle for mutual admiration and dependence. Their children were sent to England on one of the Kindertransports at the ages of four and seven, and grow up believing that they have done something wrong. By the time the family is reunited the damage is done, and both children choose to remain in England, with only occasional visits to Germany.

Krechel’s account of Kornitzer’s life in Cuba forms the heart of the novel and stands in sharp contrast to the difficulties of his life in Germany. The Cuban part of the narrative is full of colour and light. Kornitzer works for a patents lawyer and assists other political exiles in Cuba. His relationship with Charidad Pimienta, a Cuban maths teacher, constitutes the novel’s emotional core. When their daughter, Amanda, is born, Charidad becomes acutely aware that Kornitzer has another family to whom he hopes to return.

State Justice is the portrait of a divided family whose experiences of persecution and loss are emblematic of the historical period in which they lived.

Ursula Krechel was born in Trier in 1947 and now lives in Berlin. She studied German, art history and dramatic arts before becoming a university lecturer. Her first play, Erika, was published in 1974 and was translated into six languages. Since 1977, Krechel has published poetry, prose, radio plays and essays. She has won several awards for her work, including the Hermann Hesse Grant of Calw (2006), the Rheingau Literature Price (2008) and, most recently, the Orphil Prize for Poetry (2012).

Jung und Jung was founded by Jochen Jung in 2000. It focuses on contemporary German language literature, with an emphasis on Austrian authors. Its programme is defined by works of linguistic interest and intellectual curiosity, and its authors include Peter Handke, H.C. Artmann, Peter Waterhouse and Klaus Reichert. Jung und Jung also publishes books on art and music, as well as translated fiction.