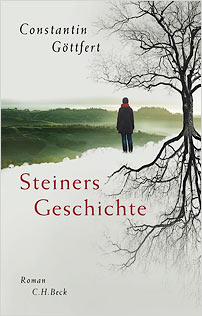 Steiner’s Story is a tale of emotional displacement that affects several generations of so-called Carpathian Germans – the German minority that existed in Czechoslovakia before the Second World War and was subject to massacres in retaliation for Nazi crimes.

Ina, the granddaughter of the eponymous Steiner, grows up on her family’s small farm in Lower Austria. While studying for a teaching degree she falls in love with composer and teacher Martin, and soon becomes pregnant.

Ina has always known that there is something about the Steiner family’s history that was not to be discussed, but it is only when her grandmother dies, and Steiner’s health quickly decays, that Ina starts asking more detailed and probing questions. Her visit to a club for Carpathian Germans in Vienna only seems to confirm to her what she’d already known, namely that most of the men of her grandfather’s generation who are members of the club had also served in the Third Reich, especially in the SS. When Steiner dies of cancer, Ina decides to explore his past.

She embarks on a journey back to ‘Limbach’ – the Germanspeaking locality in Slovakia where the Steiners had lived and thrived for centuries. Ina, now with a baby in tow, breaks up with Martin so that she will be free to start looking for answers that will reveal her problematic heritage.

But Martin refuses to let Ina go. He follows her to Slovakia and meets people from Steiner’s past along the way. One of them is Podobný, a former employee at Steiner’s farm, who takes care of Ina when she arrives in Limbach. Step by step, Steiner’s history is brought to light and the dramatic impact of National Socialism on past and present generations of Czech and Austrian families becomes painfully clear.

When Martin and Ina return to Austria, Ina reads about a new bridge that is to be built over the Morava – the river that forms the border between the Czech Republic and Austria – signalling a new and optimistic attempt to reconcile Czechs and Austrians.

Göttfert has a penchant for the absurd and mysterious. His writing is highly accessible yet rich in imagery and atmosphere, giving the novel the excitement and suspense of a psychological thriller.

Constantin Göttfert was born in 1979 and lives in Vienna. He studied German literature and attended the German Literary Institute in Leipzig. He has received several prizes and scolarships.

Verlag C.H.Beck is one of Germany’s best known publishing houses dealing both with books and magazines, employing a staff of over 400 and with approximately 6,000 titles in print. It has a strong base in academic and specialised works on history, ethnology, philology, literary theory, religion and philosophy, politics, art and law. Its fiction list has grown steadily and is respected for the importance its editors place on the literary and artistic merits of its titles.