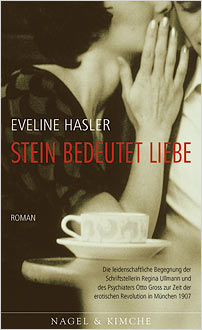 Eveline Hasler, who won the St. Gallen Kulturpreis in 1993, has taken as central character in her latest historical novel the author and poet Regina Ullman (1884-1961), who had received the same prize many years earlier in 1954. Hasler was inspired to investigate Ullman’s life after reading her intriguing claim that another story was concealed under those she had written. The result is this lovingly crafted novel which uses elements of its subject’s life as building blocks to evoke the spirit of its time.

The book opens with a scene in Café Stephanie, a central meeting point for literary and bohemian types during the period and immediately introduces two of the central female characters, Frau Ullman and her twenty-two year old daughter Regina. The mother is dominant, talkative and keen to promote her daughter’s budding literary talents. The daughter is silent and melancholic, yet closely observes the café patrons and seems highly attuned to the detail of her surroundings.

The theme of childhood and the influence of the past on later life is an important one in this book, illustrated mainly by the attempt of two of the central characters to escape the influence of a maternal or paternal figure. It is through this urge that Regina’s life becomes closely interwoven with that of Otto Gross, psychiatrist and follower of Jung and Freud. He is fascinated by the talent he sees within her and by making her his patient embarks on a mission to release her from her mother’s dominance and release her true potential. The treatment intensifies and they begin an affair, facilitated by Gross’s insistence on owning a key to the Ullman household but is complicated by the psychiatrist’s serious cocaine addiction and other love affairs. As the novel gathers pace and Regina grows older the reader is kept abreast of the many shifts in relationships which reflect the spirit of the sexual revolution. It is into this intricate web that Regina is drawn, and ultimately also saved.

This absorbing novel is a compelling narrative of an incredibly talented woman’s struggle to find her voice and live on despite personal tragedy.

Eveline Hasler was born in Glarus and now lives in Tessin. Her novels, most recently Tells Tochter (2004), have received numerous awards and been translated into many languages.

Verlag Nagel & Kimche was founded in 1983 and quickly established itself as one of Switzerland’s leading publishers. Emphasis is placed on the work of contemporary Swiss authors. In 1998 Nagel & Kimche joined the Hanser group of publishers.