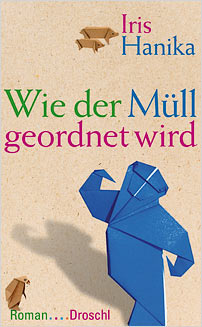 Taking out the Trash is immensely enjoyable both as a warm-hearted Berlin novel and as an unlikely love story.

The first part of the story focuses on Adrian Antonius, one of the most entertaining and idiosyncratic characters to emerge in German literature in recent years. Antonius is an eccentric in his early fifties who is at odds with the world. He spends a lot of time making lists and also surfs the Internet, cycles aimlessly through Berlin and writes poetry. One of his more curious habits is that of checking the waste and recycling bins where he lives, making sure that everything ends up in the correct container. One day he finds a notebook in the wrong bin. It is full of thoughts and feelings jotted down by one Renate, a middle-aged woman who has recently lost her husband. Antonius reads the notes and would have us believe that he and Renate meet and become friends. When he admits that he has made this up, the reader realises that he doesn’t care about fact and fiction in the normal way, making him a somewhat unreliable – but all the more intriguing – narrator.

The second part of the book takes the reader back to the spring of 1990. A young couple – Markus and another Renate – want to split up. Dorothea, who used to go out with Markus, returns after five years in the U.S. to find Berlin much changed. The divided city on the verge of unification springs to life: snippets of conversation, a taxi ride, music on the radio and Dorothea’s own musings brilliantly capture the extraordinary atmosphere. Dorothea works for Professor Amos Mann, whose parents were murdered when a book was stolen from their home in the seventies. Mann believes that the missing book might be located in the private collection of wealthy Berlin industrialist Kurt Marschner. Meanwhile Marschner’s introverted son Adrian has been having a cautious affair with Renate. Dorothea locates the missing book and, in a dramatic escalation of events, Adrian ends up attacking her with a knife.

In the final part of the story, Adrian Antonius writes letters to Dorothea and the Renate who wrote the notebook and the different threads of the story are brought together. Antonius is left to reflect upon the breadth of childhood and old age, while the world and the people in it spin on through the universe unprotected. Iris Hanika’s gift for characterisation is employed to full effect in this witty, wryly observed portrait of intersecting lives in Berlin.

Iris Hanika was born in Würzburg in 1962 and has lived in Berlin since 1979. She was a staff writer for the Berlin section of the Frankfurter Allgemeine Zeitung and contributed a chronicle to Merkur magazine. In 2006, Iris Hanika was awarded the Hans Fallada Prize and in 2008 shortlisted for the German Book Prize. In 2010 she won the European Union Prize for Literature and in 2011 the LiteraTourNord Prize.

Droschl is based in Austria and has devoted itself exclusively to promoting contemporary authors. Within the German-speaking world it is a well-known house for contemporary literature, publishing international authors like Lydia Davis, Oksana Sabuschko, Georgi Gospodinov or Julien Gracq as well as Germanlanguage authors like Iris Hanika, Ilma Rakusa, Thomas Stangl, Olga Martynova, Thomas Jonigk and Werner Schwab. Droschl stands for an attitude that does not consider literature as representation but as protest and comment from the fringe.