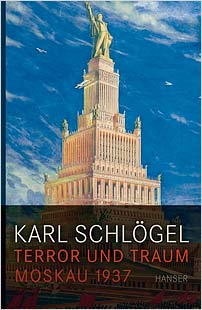 Leading us into his exploration of the situation, and also the significance, of the Soviet Union in 1937, Karl Schlögel chooses the bird’s-eye view afforded by Michail Bulgakov’s fictional masterpiece The Master and Margarita on Stalin’s reign of terror, and neatly concludes this vast but never sprawling labour of love with Nikolai Bukharin’s autobiographical novel How It All Began.(Bukharin himself was executed after the Trial of the Twenty-One in the Great Purges). These literary examples demonstrate how, in those totalitarian days, education and reading had become an existential need for people, especially young people, facing daily danger and threats of death.

The year 1937 is one of immense paradoxes: the glamour of the Moscow Canal, the new metro, skyscrapers, a celebration of the body beautiful, but also that of the disappearance of an increasing number of prisoners into the gulags, the loss of privacy, the unstoppable influx of displaced farmers into the city, and so many disappearances that production of the phone book Vsja Moskva was simply cancelled. Against a backdrop of ‘progress’ this was also the Moscow of the sinister House on the Embankment (as depicted in Yuri Trifonov’s eponymous novel), and a place in which the general population census conducted in that year showed so many lives extinguished that those responsible for the census were shot in their turn.

The historian deftly switches from the well-known heroes to the unknown masses, taking the reader, for example, to Butovo, the clandestine execution shooting range. The atmosphere of those days is recreated as Schlögel subtly highlights the way in which the Kremlin lied to the country and injected the fear that prepared the way for the show trials.

A character analysis of Andrei Vyahinski, the main prosecutor in those trials, illustrates the similarities between German Fascism and Russian Communism. The author reflects on the unleashing of vengeance and aggression, and also the fury of exhausted workers in the factories as hysteria and chaos became the order of the day.

Schlögel concludes that without the dispelling of all the mysteries surrounding Stalin’s system and careful analysis of its past, the West cannot fully appreciate the complexities of Russia today.

Karl Schlögel was born in 1948 and studied philosophy, sociology, Eastern European history and Slavonic Studies in Berlin, Moscow and St Petersburg. He is now Professor of Eastern European History at the Europa-University Viadrina in Frankfurt /Oder. Among the prizes he has won for his widely-acclaimed published works are the Sigmund Freud Prize and the Georg Dehio Prize, both 2004, and in 2005 the Hamburger Lessing-Preis.