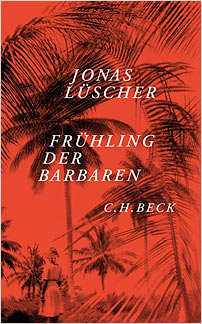 In a not-too-distant future we meet our narrator Preising, a leading Swiss industrial tycoon whose career has taken him to some extraordinary places. While on a business trip to Tunisia, Preising is invited to spend the week with the daughter of a local wheeler-dealer. Preising accompanies her to the nuptial celebrations of two London City traders at an old Berber camp in the desert which has been transformed into a luxury holiday destination.

Much comedy ensues as we witness the traders’ indulgent poolside lifestyle – their gym-honed bodies, cynical humour and libertine attitudes to money. With the wedding party in full swing – complete with the bride riding up the aisle on a camel, the groom’s disapproving mother reading a poem, and masses of alcohol – the global financial system stands on the brink of collapse, and the UK faces bankruptcy. As the wedding guests nurse their hangovers, they learn that the pound has depreciated to ten times its former value, and their whole world begins to crumble around them.

The Barbarians’ Spring is a credible, probing and refreshingly original satire for our times.

Jonas Lüscher was born in Switzerland in 1976 and attended school in Bern. After working in the German film industry he studied at the Munich School of Philosophy. Currently pursuing his doctoral studies in philosophy at the ETH Zurich, he lives in Munich.

Verlag C.H.Beck is one of Germany’s best known publishing houses dealing both with books and magazines, employing a staff of over 400 and with approximately 6,000 titles in print. It has a strong base in academic and specialised works on history, ethnology, philology, literary theory, religion and philosophy, politics, art and law. Its fiction list has grown steadily and is respected for the importance its editors place on the literary and artistic merits of its titles.