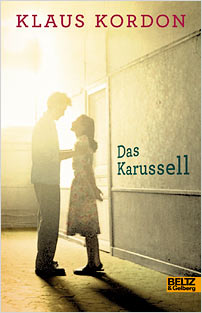 The Carousel is a family chronicle spanning the First and Second World Wars. It focuses on the life stories of Bertie and Lisa, who grow up without knowing one another, yet are always destined to be together. Herbert ‘Bertie’ Lenz is placed in an orphanage by his mother while still a baby, while Lisa Gerber loses her father in the First World War, then moves to Berlin as an adolescent with her mother and siblings. The carousel of the title refers to one of the few happy episodes of Bertie’s childhood, when he is given a miniature carousel by his half-sister, a gift which he treasures for the rest of his life. The image of the carousel, symbolising the circularity of the characters’ suffering, is central to the novel.

Kordon’s harrowing account of Bertie’s early days, growing up in the regimented and brutal environment of a Catholic orphanage, stays with readers long after they finish reading. Visited regularly by his silent and impassive mother, Bertie dreams that one day she will take him home to live with her. His mother never does remove him from the orphanage, however, leaving him instead to grow up enduring savage beatings and solitary confinement in an orphanage cell. Bertie finally finds some measure of satisfaction by training as a builder and leaving the orphanage behind.

Lisa’s story starts at the cusp of the First World War, when she is growing up in the countryside with her parents and three younger siblings. When her father is called to military service and then killed in the war, Lisa’s mother has to go out to work, and Lisa’s heavy domestic responsibilities caring for her siblings begin. Then the family moves to Berlin and Lisa becomes the family’s main breadwinner. Lisa and Bertie eventually find their way to one another and live happily together. However, their time with each other is cut short by the Second World War, when Bertie is sent to the Russian front, where he is eventually killed. The novel ends with an afterword from the couple’s son, who learned of his parents’ story shortly before his mother’s death, and vowed one day to tell it.

Kordon writes with a pleasingly crisp narrative voice and has an impressive eye for historical detail, conjured in the vivid tableaux of the war-torn city of Berlin. This is a wellcrafted and affecting novel which stands to be very well received by young English-speaking readers.

Klaus Kordon was born in 1943 and lives in Berlin. He is among the most renowned authors of books for children and young adults in Germany and his work has received numerous awards. His latest novels are Kiko and the historical novel Im Spinnenetz (‘In the Spider’s Web’).

Beltz & Gelberg is the children’s book division of the Beltz Verlagsgruppe, the publishing venture which was established by the printer Julius Beltz in 1868. Beltz & Gelberg was set up in 1971 by Hans- Joachim Gelberg and has offered a rich range of children’s literature ever since. The Gulliver paperback imprint was founded in 1984. In 2002 Beltz took over the book rights of Middelhauve, and two years later initiated the paperback series MINIMAX.