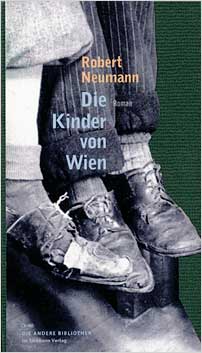 Austrian parodist and novelist Robert Neumann sets his eventful and yet static story in a cellar in Vienna, depicting a gang of desperate children clinging together for warmth and company straight after the Second World War. As he says in his foreword, however, it could have been a cellar anywhere and everywhere, ‘back in ‘45… east of the meridian of despair.’ The book was first published in English in 1946, translated into German by Neumann’s then wife Franziska “Rolly” Becker and published in 1948, before being released in Neumann’s own excellent German translation in 1974, never to appear in English again.

The six children have formed a substitute family, each of them coming from a different corner of the Reich. Thirteen-year-old Jid, a stunted concentration camp survivor, is the leader of the group composed of fifteenyear- old sometime-prostitute Ewa, her cynical Nazi supporter friend Ate, fourteen-year-old thief Goy from a children’s relocation camp, seven-or-nine-or-six-year-old Curls who ‘owns’ the cellar, and a malnourished toddler with a ‘ballooned’ stomach called Tiny. The children watch falling-apart shoes, army boots and wheels file past overhead, eavesdrop on conversations going on outside and leave the cellar to scavenge, spy or steal. Everything has its price; the worth of the little information they have, their possessions, and even their bodies, is weighed out in cigarettes. Their one salvation is a hopeful young black priest from Louisiana, Reverend Hosea Washington Smith, who attempts to rescue the children and take them to Switzerland, but fails.

The children talk in a peculiar mix of German, Yiddish, Polish, Russian, American slang and a secret language all of their own, which speaks both of the invasion of territories and the mixing of disparate peoples during and after the war, as well as the children’s own attempt at forging their own post-war identities. In his foreword, Neumann asks the question many would have asked: why translate the book into German when it already existed in English? He responds by saying that as much as the book is in remembrance of those that led short hard lives in the war, it is also a memento of the specific language that they spoke; the language of displaced persons.

The dialogue is rhythmical, argumentative and repetitive, just as children really speak; but the things that they talk about, do and experience are horrifyingly different from a childhood a reader in times of peace would recognise. The book, confined to the claustrophobic cellar, with its tense discussions about whether Tiny is dead or just playing dead and the way Jid tries to talk his way out of a beating by telling a man looking for Ewa how healthy and clean her body is, feels like a gripping play being performed in a dark and silent black box theatre that the audience cannot exit.

This edition includes an essay by Ulrich Weinzerl that contextualises the significance of Neumann’s book as a cry for help to an international public; a cry that was swiftly taken up by the UK and the US in the void left by Neumann’s native Austria. At the open and close of the book there are also striking and highly affecting photographs taken in Vienna between 1945 and 1948 by the Austrian-American photographer Ernst Haas (1921-86), which include images of soldiers returning with missing limbs and of barefoot, hungry children in clothes full of holes.

Neumann’s book is an authentic and shocking reminder of how war steals the innocence of children and that it is always the most vulnerable members of society who are taken advantage of in times of chaos, when they should be the ones offered the most protection.

Robert Neumann (1897-1975) was a talented and prolific writer of Jewish descent. He shared his firmly communist principles with the satirical Austrian writers of the 1920s and 30s. Neumann’s books were banned in Germany in 1933, and in 1934 he left Vienna and found exile in Great Britain, becoming one of the few exiled authors to publish in English. Neumann was Acting President of the Free Austrian P.E.N. Club in London, honorary President of Austrian P.E.N when it was reinstated after the war, and Vice President of International P.E.N. He worked for the BBC and as an editor at a publishing house, initiating the translation and release of works by writers such as Arnold Zweig and Heinrich Mann.