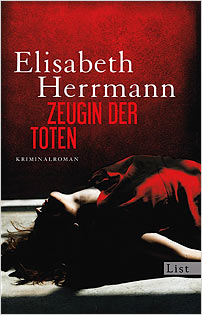 Herrmann’s debut thriller, The Cleaner, is a genuinely thrilling read with breathless twists and turns throughout and satisfyingly unexpected outcomes right up to the end. A sparkling follow-up to her award-winning crime novels.

Judith Kepler is a ‘cleaner’ – the person who removes all traces of death once the police have completed their work at a crime scene. A clean-up job after a particularly drawnout and bloody murder plunges Judith into the dark world of international espionage, when she discovers that the murdered woman – Christina Borg – had Judith’s own files from the children’s home that they once apparently shared. Judith’s quest to discover her link to Borg attracts the attention of the CIA, of German intelligence agencies and of unknown rogue agents who are trying to find a ‘lost’ microfilm uncovered by Borg and which contains details of top East German spies in senior positions in the West. Judith tracks down Quirin Kaiserley, a former top agent for the West who is suspected of sabotaging the handover of the microfilm years before. This in turn leads her back to the children’s home where she and Christina were brought up.

Woven into this action, Kaiserley joins other agents in trying to track down Judith, with at least one of them determined to kill her. The action intensifies; Judith and Kaiserly become more entwined as they follow the trail to Sweden, where she is kidnapped, drugged and framed for the murder of Borg’s mother. Shady deals, the use of multiple identities, suspicious behaviour by unexpected characters and technical wizardry create a race to the dénouement.

As the plot twists and turns, and Judith reaches further back into her past, she discovers her mother’s story. Working as an informer for the Stasi, her mother accepts an offer from the West German security services to flee to Sweden. But the escape fails catastrophically, and Judith’s mother throws herself under a train to avoid arrest by the Stasi. Judith witnesses this horror, and is subsequently sequestered in a children’s home by the Stasi. A girl of her own age is taken from the children’s home and sent to Sweden in her place – so that the Stasi can still arrest the West German agents on charges of people-smuggling.

The result is a supremely well-crafted thriller, with multiple cliff-hangers and relentless suspense. Strikingly visual, it would make an excellent adaptation for the screen.

Elisabeth Herrmann is one the most exciting voices of our time. Lively, dark and atmospheric, her writing style has been delighting readers of crime fiction since the publication of The Sitter in 2005, which is currently being filmed. The author lives in Berlin with her daughter.