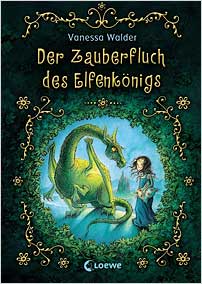 During a hot summer night, ten-year-old Ariane is abducted by a dragon, who bundles the girl and her pillow into a sack and flies off with her to an enchanted forest. Not all the fantastical creatures who inhabit this forest and masterminded the abduction are well-disposed towards Ariane – why else would Leandro, the Elf King, cast a spell on her which will prevent her from ever going back home? But some of the forest creatures become her friends, among them Knaster and Theodor, a goblin and a young hare, who get themselves into all manner of scrapes, including being hunted by a pair of terrifying griffins while trying to get the magic twig that was used for the spell into their possession. Their luck changes when Obligo, the dragon, comes to their rescue. And then there is Elvira, a warm and caring she-wolf, who shares her lair with Lucretia, a snake, gives the little girl food and shelter, and hatches a daring plan which turns into a dangerous and hair-raising adventure, filled with hazards and often precarious encounters with, for example, a rather vicious snail and a cantankerous witch.

The cause of Ariane’s abduction was a mistake by her half-brother Erik, a keen entomologist, who inadvertently captured Musella a fairy, when the latter was visiting their mother, Linda (a children’s illustrator, by the way), in one of her dreams, mistaking her for a dragonfly. He finally turns up to put everything right and the reader’s patience is rewarded – but not without a stirring final section to the book, in which the strands of both plot and sub-plot are brought together and a final bout of wonders and excitements are put on display.

A gripping storyline, imaginatively described settings, brilliant language and a refreshing sense of humour are among this book’s many virtues. Fire-breathing dragons, magic spells, dangerous adventures and heroic acts – all the things that children like are here in abundance, along with witches, elves, water sprites and goblins and (underlying the fantasy) themes that echo present-day issues and inevitable human flaws.

And finally the main character. Ariane herself is just right – a normal ten-year-old showing all the emotions and reactions that one would expect, plus bravery and adaptability. An unbeatable package, and beautifully illustrated too.

Vanessa Walder was born in Heidelberg in 1978. While she was studying law at university she was already writing and publishing short stories and also working as a freelance journalist. After three years as editor of an Austrian magazine for young people she is now writing full-time.

Previous works include:
A series for teenage girls entitled Sisters under the pseudonym of C.B. Lessmann (fifteen books in the series thus far, first one published 2001); a series for first-time readers starting in January 2008 with Die Froschprinzessinnen.

Loewe Verlag GmbH was founded in 1863 by Friedrich Loewe in Leipzig. It is one of the oldest and most important children’s books publishers in Germany. In the early twentieth century, Loewe has published fairy tales, children’s classics and picture books. Heinrich Hoffmann’s Struwwelpeter (1903) and other great classics were first published by the firm. Today Loewe publishes a broad range of titles, from picture books to high quality children’s fiction, and non-fiction for both children and young adults. Authors include Cornelia Funke and Kai Meyer.