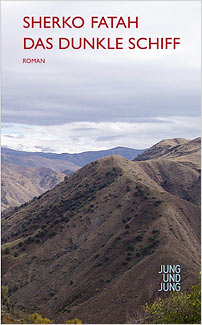 A nameless boy in a mountain landscape watches a group of old women collecting medicinal herbs. A helicopter arrives, and the boy wishes it would take him away with it. It lands, and soldiers climb out. They drive the women to the helicopter, which then takes off. After it has reached a certain height, the boy watches as, one by one, the old women plummet from the hatch, their robes flapping in the wind.

This horrific prologue to Sherko Fatah’s grim novel follows the life of Kerim, whom we assume to be the nameless boy we have already met, from childhood to youth. The son of a restaurateur who dies when he is still young, he recalls a happy childhood with melodramatic moments – being attacked by dogs on the way to school, and, on one occasion, seeing a group of men being urged along to a large and forbidding-looking building. Who are they? Prisoners, his father explains. As Kerim grows up (and learns English), we become more aware of the war that constantly surrounds him – apparently the first Gulf War. Later we move on to the war in Iraq (the book is written using a back-andforth technique), when, almost by accident, he falls in with a group of religious zealots, the ‘Warriors of God’, led by the sinister Mukhtar. When Mukhtar orders him to kill his old English teacher, whom he has found hiding in a cave, he has had enough. He and his fellow assassins decide to give the teacher a reprieve, telling Mukhtar, in the already notorious phrase, ‘We played football with his head’. Karim himself escapes by stowing away on a ship, gets thrown off by the crew, but eventually reaches Germany, where one of his uncles lives, and begins his asylum application. But, tragically, it is too late. Too many bad things have happened in his life, the past catches up, and finally he is shot.

Readers who enjoyed Mohsin Hamid’s The Reluctant Fundamentalist and Hari Kunzru’s My Revolutions will like this novel too. It is very vivid in its evocation of the immigrant experience and the all-pervasiveness of wars that are still going on everywhere around so many of us. You’re willing Kerim on, but you know it isn’t going to work out. A gripping adventure and a chilling morality tale. Sherko Fatah should be known and read here.

Sherko Fatah, born in Berlin in 1964, grew up in the GDR, the son of an Iraqi Kurd father and a German mother. In 1975 the family moved to West Berlin via Vienna. The author studied Philosophy and the History of Art in Berlin. He has been awarded several prizes including the Aspekte Literature Prize for the best first book in 2002 and an Alfred Doblin Scholarship in 2003.

Jung und Jung Verlag was founded in 2000 in Salzburg. It offers a distinguished list of German and international literature as well as books on art and music. Authors include Ludwig Fels, Alfred Kolleritsch, Ursula Krechel, Martin Prinz, Arnold Stadler and Peter Waterhouse.