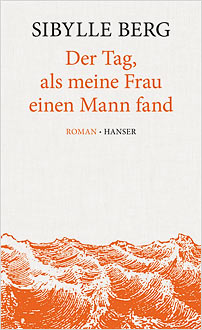 In her latest novel Sibylle Berg applies her keen observation and acerbic humour to the dynamics of sex in contemporary life.

Married couple Chloe and Rasmus have left Germany for the tropics, where Rasmus, a failing theatre director, has been assigned a project which is supposed to relaunch his career. Rasmus’ project is stalling but Chloe is there to comfort and stand by her man, until the day they find their way into a massage parlour for tourists. While Rasmus succumbs to the opium pipe and sleeps peacefully, Chloe experiences the best sex of her life with Benny, and becomes addicted to it to a degree which she cannot rationally understand. Her body rules her as it has never done before and brings her to the brink of desperation. She returns to the parlour day after day until the masseur’s wife throws her out, seeing that her partner is forming a relationship with Chloe, who has by now become a very special customer. While Rasmus fails to realise what is happening around him, he increasingly feels Chloe’s distance and contempt.

Back in Europe, the marriage seems to have fallen apart. Benny announces that he wants to move to Europe to be with Chloe and duly installs himself in the couple’s designer apartment. His arrival initiates a downward spiral of excitement, sexual fulfilment, desperation, humiliation and abuse. Rasmus ends up having a heart attack and Chloe follows him into hospital with an almost lethal combination of syphilis and streptococcal infection. Benny finally leaves, disgusted by the way he feels he has been used and abused. Rasmus and Chloe emerge from the hospital as reborn and determined to be there for one another, with a disillusioned but utterly clear vision of their life together, or of what must pass for togetherness.

In her tersely poetic style, Sibylle Berg gives us a deep analysis of the way in which mutual dependence functions, as Rasmus and Chloe narrate their experiences in alternating chapters. This is a devastatingly clear-sighted account of the demise of the moral, emotional and financial certainties of a generation and of a class that lives on the brink of the abyss and cannot but look down into it. The Day My Wife Found a Husband is a great novel that will appeal to a wide audience for its stylish writing, its tense dramaturgy and its topical themes.

Sibylle Berg has written eleven novels, twelve plays and countless essays; her work has been translated into thirty-four languages. In 2009, she published her first novel under the Hanser imprint, Der Mann schläft, followed in 2012 by Vielen Dank für das Leben.