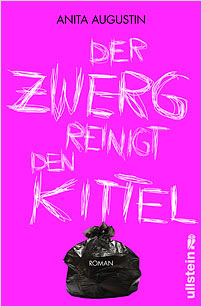 This is a very funny novel, a million miles away from the mild, safe humour English-speaking readers might associate with German-language writing.

Almut Block hasn’t been able to sleep for forty years. She spends her days and nights lying in bed chain-smoking. Then, out of the blue, she receives a call from an old friend who invites Almut to join her and two others in a plan to turn their old age into one long holiday, like the last one they took together in 1983. If they can prove that they require a sufficiently high level of care, the state will pay for it – and there is a nursing home with a corrupt director who is prepared to help them cheat the system. The care home is staffed by sadistic nurses and teenagers on community service, and inhabited by entertainingly deranged old people. Just when the friends have almost made it to the end of their trial period, the Minister for the Elderly comes to give a press conference at the home. She announces that it is to become a centre for medical research, where new drugs for dementia and other agerelated illnesses will be tested on the elderly. Enraged, the friends ambush the minister on her way out and beat her to a pulp in the basement.

This confident debut novel is tightly written, punctuated with recurring motifs, word-play, and wonderfully visual metaphors. The book’s title, for example, comes from a ‘creative therapy’ session in which the participants are forced to play a form of laughably easy hangman using common sayings. The phrase in question is the German for ‘the end justifies the means’ which morphs into ‘the dwarf scrubs the scrubs’ in the mouth of one of the home’s senile inhabitants.

The black comedy around subjects like dementia, death and depression is both refreshing and sometimes uncomfortably close to the bone. Like the best comedy, there is also a layer of social commentary here, in this case about our aging population and the looming public funding crisis. The book’s appeal lies partly in its ability to shock and to make the reader quite genuinely laugh out loud – but also in the twist in its tale, which is masterfully handled and turns a raucous story about old ladies playing the system into something far more sinister.

Anita Augustin was born in Klagenfurt, Austria. She studied philosophy and drama at the University of Vienna. She is also a graduate of Austria’s first-ever college of barkeeping. After spending time in New York and London, she now lives in Berlin, where she works in theatre.