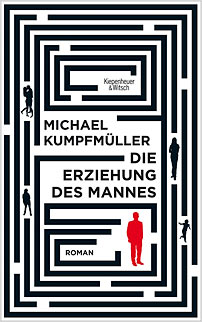 Michael Kumpfmüller’s latest novel is an entertaining investigation of modern masculinity which, like two of his previous works that have already been translated into English, is sure to delight an English-language readership – both men and women alike.

The Education of a Man chronicles the emotional journey of its likeable, self-deprecating protagonist, Georg, illuminating how his experiences and relationships have made him the man he is. The novel is divided into three parts: the story with his wife, his upbringing and early relationships and then his most recent history. The story is firmly anchored in the quotidian, which is part of its charm.

At the beginning of the novel Georg is in his mid-twenties and has just met a woman who sparks something in him, helping him to escape from the unhappiness of his current seven-year relationship. He starts a family with her but remains unhappy. We are invited to wonder whether his patriarchal father, who ruined the family with his affairs, has something to do with Georg’s apparent inability to have fulfilling relationships. When Georg meets another woman, the love of his life, he decides to break out of his unhappy marriage, but it seems that for him there is no such thing as freedom anymore. He remains committed to his children and through them is bound to his unforgiving ex-wife. When all else fails the love for his children is the one constant thing that will hold him together, giving him a purpose and a fight that he is otherwise lacking.

Kumpfmüller’s sensitive and poetic diction draws readers into the story and slowly reveals Georg’s character to us, paralleling his gradual development into someone he himself is willing to call a man. Georg is a composer and this musicality is reflected in the narration. With every page the reader understands more and more how this man has become who he is. In the end, when he has grown old and disillusioned but at peace with himself, one has the feeling to have truly witnessed the education of a man and to have grown fond of him, both despite and because of all his faults and shortcomings. This is an authentic portrayal of 21st century manhood that will resonate widely with readers and speaks to the ongoing debate about gender roles in our society.

Michael Kumpfmüller was born in Munich in 1961 and lives and works as a freelance writer in Berlin. His much-praised novel, The Adventures of a Bed Salesman, appeared in 2000 and was his first great literary success. His second novel Durst was published in 2003, and his novel Nachricht an alle was awarded the Döblin Prize before its publication in 2008. His novel The Glory of Life became a bestseller on publication in 2011 and received much praise from the literary critics. It has now been translated into twenty-three languages.