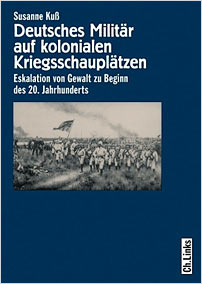 Susanne Kuß emphasises that the German colonies were not a testing ground for the German genocidal policies of the Second World War. She compares three colonial wars: the Herero and Nama war in German South-West Africa (1904-1907), the Maji Maji war in German East Africa (1905-1908), and the war in China in 1900 which involved all of the colonial powers based there. Extreme violence was perpetrated in all three wars, but there were vast differences. To explore why, the author considers the different conditions that characterised each theatre of war. This allows her to explain why a ‘punitive expedition’ against insurgents led to a genocidal war in German South-West Africa, but nowhere else. Her comparative analysis of military writings in Germany, Great Britain, France and the USA is also very instructive. It demonstrates how the military observed and sought to learn from each other.

Susanne Kuß was born in 1965. From 1984 to 1991 she studied history, philosophy and political science in Freiburg and Berlin and between 1992 and 1994 she was a staff member of the East Asian Department at the Free University of Berlin. She completed her doctorate in 1998. Until 2008, she held various positions at the History Department of Albert Ludwig University in Freiburg; She has published widely on colonial history and German-Chinese history.