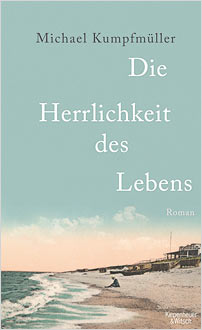 Much of this intriguing novel about Franz Kafka’s last year is mediated through letters, telegraphs, and the telephone; the author has genuinely captured the excitement of modernity, a world with cinema, mobility, and long-distance communications. At the same time The Glory of Life achieves a meditative quality and offers beautiful insights into what really makes life worth living.

To say that Franz is indecisive would be an understatement, and it is precisely this aspect of his character that gives the book its structure. Twelve chapters describe his tentative ‘coming’ to Berlin, twelve more cover his difficulties ‘staying’ there, and the last dozen depict Franz slowly ‘leaving’ this life, nursed by his lover Dora and a friend called Robert. Friendship nourished by communication and loyalty is skillfully portrayed. There are touching descriptions of the physical intimacy shared by both Robert and Dora with the dying Franz, as they wash and feed him together. Beginning with a holiday-cum-convalescence on the Baltic Sea in July 1923, and ending with his death in a sanatorium near Vienna in July 1924, it is surprising that the last year of Kafka’s life can be told as a love story. The perspective shifts between Franz and Dora. Dora is in her mid-twenties, while Franz is already forty. Yet as the pair fall in love, Franz impulsively decides to move to Berlin in order to join Dora there.

The problem is that 1923 was not a good year for anyone to move to Berlin. Inflation was sky-rocketing, and for Franz and Dora there are occasional glimpses of the anti- Semitism that was deeply ingrained in early twentiethcentury European society. Franz himself has ambivalent feelings towards Judaism, the Hebrew language, and even to Jews. But the greatest obstacles he has to overcome are the influence of his domineering sisters, his fear of an authoritarian father, and his resulting inability to assert himself. There are several well-observed passages about Franz’s psychology, notably regarding the difficulty of telling lies over the phone, or analysing the facts that are not written about in his letters.

A very convincing combination of historical research and fictional reconstruction of events, The Glory of Life will appeal to a wide audience not only for its contribution to our appreciation of Kafka but also its depiction of Weimar Germany and central European society.

Michael Kumpfmüller was born in 1961 and now lives as a freelance writer in Berlin. In 2000 his celebrated debut novel Hampels Fluchten was published, in 2003 his second novel Durst, and in 2008 Nachricht an alle. He was awarded the Döblin Prize for this most recent novel.