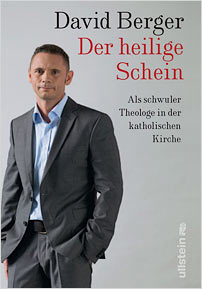 Part memoir, part exposé, this book offers a full and frank assessment of the contemporary Roman Catholic Church. First and foremost, Berger is an academic theologian, and because of the privileged position that he once occupied within the Church, he is able to offer a highly topical firsthand testimony. Berger speaks with urgency about the conservative turn the Church has recently taken, having frequented the influential academic circles in Germany and Austria, Poland and Rome. And Berger’s perspective is all the more pertinent because he is openly gay.

Berger decided very early not to become a priest. However, both he and his partner quickly gravitated towards the conservative end of the Catholic Church for a combination of academic, personal, and aesthetic reasons. They were not alone, as Berger identifies a number of elements within this kind of religion that appeal to gay men. He also cites the Catechism of the Catholic Church, which states that gay people are to be treated with respect and sensitivity, and that they should be protected from discrimination. By Berger’s estimation, as many as fifty percent of Catholic clergy may be gay. He tries to analyse why they are attracted to the priesthood, and suggests the power of sublimation, denial, and the appeal of celibacy and collegiality. Berger identifies celibacy as a cover for the sexual immaturity of many priests, which in turn is the root cause of paedophilia. He therefore rejects the official Catholic position that would blame homosexual orientation for all acts of paedophilia. Indeed, Berger argues that it is in the interests of the Church hierarchy to keep its priests immature and thus docile and dependent. He describes the repressive and infantilising atmosphere in many Catholic schools and seminaries, which works to keep priests (and some laypeople like himself) under control.

Berger’s revelations of hypocrisy, secrecy and sexuality in the Church make for an intriguing read, while the personal elements of his story enable the reader to sympathise. His own analysis of the systemic problems in the Catholic Church today arises organically from his experiences, yet the wide-ranging conclusions that Berger draws ensure that this work will be read as much more than a personal memoir. The result is an important book that will interest psychologists and social scientists as well as theologians and religious commentators, but even more so deserves to be widely disseminated to a general audience.

David Berger came out in early 2010 after the Bishop of Essen described homosexuality as perverse and a sin during an appearance on a television chat show. Berger resigned from his position as publisher of the magazine Theological and a few weeks later he lost his professorship at the Vatican. Until 2010, Berger had been part of the influential ultra-conservative circle that defends the church’s claim to be the highest moral authority. Berger now works as a school teacher near Cologne.