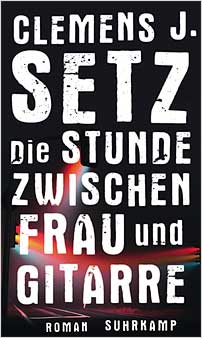 Natalie Reinegger gets her first job after training as a special needs carer. She works in an assisted living home for adults with learning and physical disabilities. One of her clients is Alexander Dorm, a wheelchair-bound, badtempered young man who is in love with a man called Christopher Hollberg. Natalie’s workmates explain that Dorm previously stalked Hollberg, putting so much pressure on his marriage that Hollberg’s wife committed suicide and Dorm was placed in psychiatric care. Years have since passed and he now has only one visitor: Christopher Hollberg. It is Natalie’s job to sit in on the meetings and keep an eye on Dorm.

Outside work, Natalie becomes a regular at a cooperative basement bar where people meet to drink, hang out, play games and enjoy casual sex. She makes friends with people there, developing a crush on a boy called Mario but not realising that he is a rent boy. She has an adopted cat that comes and goes as it pleases and a besotted ex-boyfriend. Another thing she doesn’t realise is that Frank, a barman at the basement, is following her around without her noticing.

Natalie comes to see that Hollberg is exerting subtle mental torture on Dorm during his visits and is trying to manipulate her as well. She can’t distinguish whether the many stories he tells about Dorm’s stalking and its effects are true or not. Natalie decides to stand up to him, telling bizarre stories back and encouraging Dorm to be less submissive. Natalie then suspects that Hollberg has started stalking her and breaks into his home. Angered, he attacks her physically outside the building and Frank – Natalie’s real stalker – saves her. In the novel’s epilogue set two years later, it is Natalie’s turn to visit Hollberg in a futuristic secure ward, the tables finally turned.

The Hour Between Woman and Guitar is an extraordinary work of literature, mesmerising its readers over the course of 1,000 pages with the mounting tension of its central storyline as well as through a cornucopia of weird and wonderful narrative diversions.

Clemens J. Setz was born in 1982 and lives in Graz, Austria. He has received numerous prizes for his work, including the Leipzig Book Fair Prize 2011 (for Die Liebe zur Zeit des Mahlstädter Kindes), the Literature Prize of the City of Bremen 2010, and the Ernst-Willner- Preis at the Ingeborg Bachmann Competition in 2008. Setz was shortlisted for the German Book Prize in 2009 for his novel Die Frequenzenand again in 2012 for Indigo.