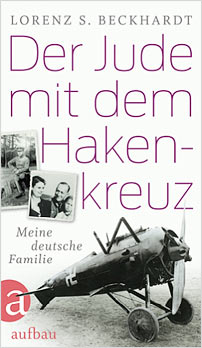 Fritz Beckhardt is a highly decorated airman in the First World War, flying in the same company as a young Hermann Göring. He also happens to be Jewish. Long before the Nazis appropriate the symbol in shaping their brand, Fritz paints the swastika on the side of his plane as a sign of good luck. This becomes a fitting metaphor for the ambiguous and complex relationship between the family and the German state in this literary biography.

The author – Fritz’s grandson – paints us a picture of the family’s flourishing business, their social position and the creeping onset of Nazism, with its tentacles reaching into every aspect of their daily life. Fritz, patriotic and optimistic, cannot believe that his fatherland will descend into the state that it does. In 1936, we see him driving his friends to the Belgian border to flee; just a year later he is taken captive in Buchenwald. Fritz emerges from captivity in 1940 after Göring (petitioned by Fritz’s lawyer and moved by the story of his old squadron member) orders his release.

Beckhardt’s story is at once unique and representative of a fascinating and often forgotten episode of European history. Its adroit interlinking of the political with the personal gives it a broad appeal that will make it a compelling choice for publishers and readers alike.

Lorenz S. Beckhardt was born in 1961, and is a qualified chemist, journalist, author, and editor for the ARD, the WDR, and 3sat, as well as a foreign correspondent in Europe and the Middle East.