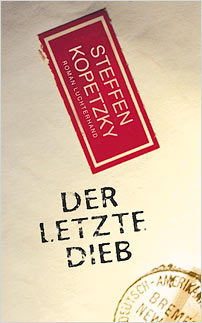 Alexander Salem is a jaded professional thief in his mid-thirties, who messes up a major job and gets into big trouble with his agent and a sinister Russian philatelist. Johanna Meister is a washed-up former GDR secret agent with a photographic memory and the key to a mysterious plan called ‘Operation North Pole’. Hawk Browning is a wealthy pulp fiction writer in New York, suffering from severe writer’s block and an obsession with the treasure of Atlantis. Steffen Kopetzky’s literary thriller, a new line for him, unites this disparate trio in a plot that moves from the lights of Monte Carlo to Berlin’s down-at-heel Neukölln district, takes in a span of years from 1923 to 2001, and follows its characters until their paths cross in a labyrinthine bunker under Tempelhof airport.

With numerous other characters and a parallel strand about Alexander’s grandfather that is eventually woven into the present-day plot, the book, in less skilled hands, could have become over-complicated, but Kopetzky’s loving attention to even the most minor figures makes them all three-dimensional. He offers interesting asides, from the history of Berlin’s wild racoon population to historical descriptions of parts of the city itself, and countless details about locks and lock-picking. And although there are many subtle threads and leitmotifs linking the characters without their knowledge, the storyline never becomes unbelievable. On the contrary, it teases the reader with changes of pace, starting fast and slowing down to expand the plot but keeping him on his toes with key scenes to await the action-packed finale. This, when it comes, turns the action on its head. It is literally only with the final sentence that the whole truth is revealed.

Crisply told in a rather cinematic style, the novel’s most obvious inspirations would seem to be films, with its gentleman thief, talented super-agent, and secret Nazi treasure. And indeed a film might not be out of the question. But meanwhile here is no throwaway potboiler but a finely-crafted piece of work, evocative even of Le Carré in his latest mode. The last three words mirror the opening sentence, showing how much care has gone into the book’s construction.

A thinking person’s thriller for the twenty-first century.

Steffen Kopetzky was born in 1971. He has published three novels to date and writes for radio, newspapers and magazines, as well as writing opera libretti and plays for both stage and radio. Kopetzky has been awarded the Carinthian State Prize, the Carolina Prize for Journalism, ARD’s Kurt Magnus Prize and the Elske Lasker Schüler Prize for Drama.

Luchterhand Literaturverlag was founded by Hermann Luchterhand in 1924 and has been publishing literary titles since 1954, an early and triumphant success being Günter Grass’s novel Die Blechtrommel (1959). Its list includes literary fiction and poetry as well as scrupulously prepared editions of authors’ complete works. In 1997 the firm was voted Publishing House of the Year by the German trade journal Buchmarkt. Luchterhand is now part of the Random House Group. Authors include Christa Wolf, Ernst Jandl, Pablo Neruda, António Lobo Antunes, Will Self, Frank McCourt, Hanns-Josef Ortheil, Terézia Mora and Saša Stanišic´.