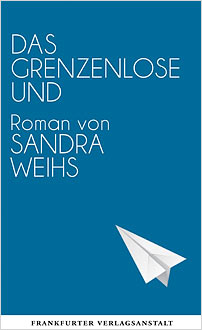 Sandra Weihs’s extraordinary debut is an intimate firstperson narrative by a girl who intends to commit suicide. Despite its harrowing subject matter, The Limitless And is a vibrant and witty read.

The Limitless And is the story of eighteen-year-old Marie, who has grown up in the care of social services, and who plans to take her own life in three months’ time. Marie routinely cuts herself and has already made several unsuccessful attempts to commit suicide. Unable to come to terms with the violent and abusive relationship she had with her mother, she pursues dysfunctional relationships with unsuitable men. In her therapist’s waiting room she meets a man called Emanuel, who asks Marie to help him lose his fear of death. He has terminal cancer and wants to end his own life to avoid the inevitable suffering. They agree to commit suicide together, in three months’ time.

Weihs’s superb writing affords direct insight into the mind of a teenage self-harmer. Marie is clearly intelligent and full of life, but cannot come to terms with her inner demons. Her problem is often that she sees through the genuine attempts by various social workers and therapists to empathise, help or reason with her. She insists it is not depression that makes her want to end her life but logic and reason. In an evocative passage that gives the book its title, Marie explains her conflicted world view: I don’t believe in good and bad, I believe there is an in-between. There is good AND bad. Especially the AND exists. And the AND is limitless, because it connects, and is always everything, because it is the in-between, it forces itself inside the good, and the bad, and explodes the boundaries. That’s why the world is the limitless and.

The Limitless And is a truly universal novel: Marie, wrestling with her negative thoughts, could be a teenager anywhere in the world. Weihs manages to balance Marie’s adolescent mind, full of scorn and doubt and insecurity, with the deeper issues at stake here. It is a testament to Weihs’s skill as a writer that when the novel reaches its tragic and deeply emotional conclusion, we are left feeling strangely positive and hopeful.

Sandra Weihs was born in Klagenfurt in 1983 and divides her time between Upper Austria and Vienna. She studied social work, and works with deprived children, adolescents and families. Her debut novel Das grenzenlose Und (The Limitless And), was awarded the 2015 literary prize of the Jürgen Ponto Foundation.