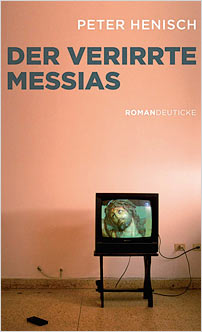 Literary critic Barbara is en route for Tel Aviv for a fortnight’s holiday and finds herself sitting next to Mischa, a charismatic younger Russian who had caught her eye at the airport. In spite of her best efforts to remain aloof, they spend the first leg of the journey together, and even an unscheduled stopover in Rome, and thus she hears his life story – complex, varied, full of dramatic twists and turns – and the reason for his trip to Israel: when he read the New Testament for the first time, young adult that he was, he realized he had experienced the stories contained in the Gospels in a previous life and believes he is Christ come again. He plans to revisit the places across the Holy Land he had known 2,000 years earlier.

Throughout their conversation Barbara is sceptical about Mischa’s narrative, peppered as it is with inconsistencies and illogical leaps. At the end of their evening together in Rome, however, when they are about to sleep together, she sees stigmata on his hands and feet, and flees in horror. She can’t bring herself to speak to him again, or tell anyone else what she has seen, but the sight has marked a turning point in her life, and she becomes obsessed with Mischa and his journey.

Over several months Mischa writes her emails and letters in which he retells the stories of the Gospels as he believes he experienced them, and in which he relates the story of his journey through Israel: it does not go to plan but is sprinkled with events and characters which parallel those of Jesus’s life as portrayed in the New Testament. However, she realises she is becoming emotionally dependent on receiving his news, though unable to communicate back. When he begins to describe his involvement with another woman she cannot bear to read, or even open, his letters.

Six months later at a conference in Rome she bumps into him. Unkempt, living in squalor, drug-dependent, he reveals the truth about the remainder of his time in Israel, the impact that the lives and stories of those around him have had, and the unravelling of the man he had once been.

Both a demanding and hugely satisfying read, this novel has it all: religion, psychology, human relationships, sex, history – in inimitable Henisch style.

Peter Henisch was born in Vienna in 1943. At university he studied German, philosophy, history and psychology and later co-founded the left-wing literary magazine Wespennest. Since 1971 he has been living and writing in Vienna. He has received numerous prizes for his works, and his 2005 and 2007 novels Die schwangere Madonna and Eine sehr kleine Frau were longlisted for the German Book Prize.

Deuticke Verlag along with Paul Zsolnay Verlag has been part of Carl Hanser Verlag in Munich since 2004. Deuticke was founded in 1878 in Vienna. Initially the firm focused on non-fiction (including Sigmund Freud’s book on dreams in 1900 and much later, in 2001, the international bestseller ‘Blackbook on Brand Companies’). In recent years Deuticke has established itself as a publisher of fiction by internationally renowned and contemporary authors, among them Iris Murdoch and Lily Brett, and Austrian writers such as Paulus Hochgatterer, Daniel Glattauer and Michael Köhlmeier.