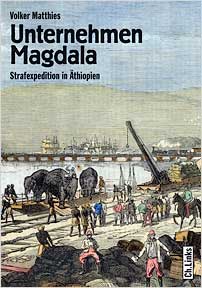 At the same time colourful and authoritative, this highly absorbing account of an international clash of cultures between a European nation at the height of its power and a rather fractured part of East Africa holds great appeal.

Matthies recounts a British military expedition to Ethiopia/ Abyssinia in 1867-68 whose stated aim was to liberate hostages, some British, taken by Emperor Theodore II. In a letter of 1862 Theodore had written to Queen Victoria assuring her of his friendship but the communication was ignored by the Foreign Office, so the insulted emperor imprisoned the British Consul in Massawa. It took two years for a diplomatic delegation to arrive but it, too, was taken hostage. The total number of prisoners ultimately held was over sixty, as well as some 180 servants. Finally, General Sir Robert Napier was ordered to mount an expedition in August 1867. His charge comprised 13,000 soldiers, mostly Indians, plus assorted scientists and mapmakers, and, for the first time, journalists including one Henry Stanley.

Theodore’s vision of a new modernised Ethiopia was breaking down in the face of political and religious opposition, and at the end of 1867 he had to give up his old capital and move to Magdala, on an isolated mountain ridge. In April 1868, the British force engaged the Ethiopians and Theodore lost half of his army. Despite thus securing the freedom of the European hostages, Napier stormed Magdala to force Theodore’s capitulation. There was no question of occupying Ethiopia, and Napier returned home as quickly as possible, looting the country’s cultural heritage as he went.

Many of the descriptions, taken from ‘The British Expedition to Abyssinia’ by Henry Hozier (1869), give the reader the feeling of actually being at the scene. The well-chosen pictures, some of them early photographs of historical importance in themselves as testimony of a new medium, give a real impression of what it was like to be there.

Through his spirited treatment of a little-known imperial adventure, Matthies discusses issues of enduring significance such as the modernisation of warfare and war reporting, and examines the real financial and cultural cost of war. Importantly, this includes the looting of national treasures, and in particular the practice of condoning the removal of such ‘prizes’ by all and sundry on the winning side.

Volker Matthies was born in 1945 and studied Political Science and Medieval and Early Modern History in Hamburg. He specialises in Peace and Conflict Studies and is Professor of Political Science at Hamburg University. For many years he has co-edited the Jahrbuch Dritte Welt, and has published extensively in peace and conflict studies as well as on the Horn of Africa region.