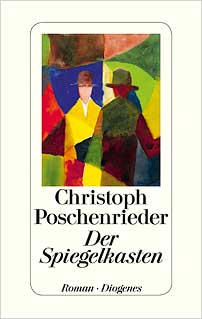 In this gripping and well-told novel, Poschenrieder takes a fresh approach to the Great War which will have wide appeal. Concise and moving, The Mirror Box moves seamlessly between the horrors of trench warfare and modern-day Munich, as the young narrator becomes increasingly immersed in photos, letters and reports about the war left behind by his great-uncle, Ismar Manneberg, a German-Jewish officer.

The great-nephew is a likeable but odd character. He is employed by a mysterious organisation – a shield for the CIA, he believes – to write English-language dossiers on media coverage ‘of interest to the US government’. He is aware of the ludicrous nature of his role: the information he is employed to report on is already provided by the newspapers. Then his employer decides to go digital, and his days of gleefully poring over the newspapers with inkstained fingers are a thing of the past. Increasingly dejected, he ponders the negative effects of digital technology and remembers the box of old papers and photos from his great-uncle. Looking through them, he finds a mysterious photograph of the ‘mirror box’.

He discovers online forums for similar Great War enthusiasts and ends up entering into a dialogue with WarGirl18, who seems to know a few things about the mysterious mirror box and the doctor who created it, Karamchand. At first, the narrator is unsure whether to trust her but he opens up and agrees to meet her after she tells him she has some letters sent by his great-uncle.

Interspersed with his attempts to find out more about the mirror box are the passages about Ismar in the trenches. He pretends to have a fiancée, and writes a letter to this imaginary woman. A reply comes back. Shocked but touched, he enters into a correspondence with the mysterious recipient. Around the same time he begins to visit Karamchand, who nursed him back to health after being wounded in the field, and becomes increasingly intrigued by the ‘mirror box’ treatment the doctor is working on. All this enables him to keep a grip on his senses amidst the chaos of trench warfare.

As this original and touching novel progresses, the tales of the present-day narrator and Ismar run increasingly parallel until they reach an intriguing, even chilling, conclusion.

Christoph Poschenrieder was born near Boston in 1964 and currently lives in Munich. He studied philosophy in Munich and wrote his thesis on Schopenhauer. He also attended the Journalism School of Columbia University, New York. He has been working as a freelance journalist and documentary filmmaker since 1993. Die Welt ist im Kopf was his first novel.