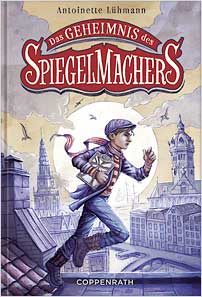 Antoinette Lühmann’s debut novel is a thriller set in seventeenth-century Amsterdam and London.

Nik, a restless fourteen-year-old yearning to travel, is obliged to leave school to help his wealthy cloth-trader father, who is depressed and unable to work following the mysterious death of his younger twin sons. When he’s not working, Nik spends his time either looking longingly out over the harbour, or running through the narrow alleyways of the town, often accompanied by his young friend Benthe. As they are chased and pelted with stones by enemy Luuk and his gang one evening, Nik escapes by hiding in the cellar of a house, where he overhears members of the Guilds of Glass Makers and Mirror Makers plotting to kill a fellow guildsman.

Soon after, Nik is sent to work in London by his father. He believes there is a connection between the guild members and the deaths of his twin brothers, whom he last saw playing wrapped in a bolt of fine material. Nik soon realises that he is now being hunted by the guildsmen in London, who suspect he has overheard their secret.

He returns to Amsterdam to continue the hunt for the guilty guildsmen, but will he be able to solve the mystery and restore tranquillity to his family?

Antoinette Lühmann was born in Celle, Germany, and studied in Lüneberg and Hamburg. She is a trained storyteller, pastor, and mother to four children aged between 1 and 11 years. She lives in a small town west of Hamburg with her husband, three sons, and one daughter. She collects ideas for stories from outside her front door and from the rest of the world, and is always at work on her next adventure story.

Coppenrath Verlag has a long tradition. Founded in 1768, the focus of the publishing program is children’s books, books as presents, beautiful designed albums and decorative advent calendars.