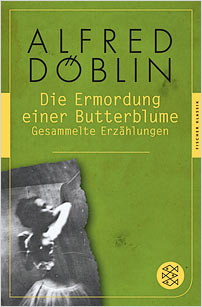 A middle-aged man finds himself assaulting a buttercup, a dancer kills her ‘body’ when it doesn’t obey her, and a couple commits suicide after a happy day on a boat trip – these are Alfred Döblin’s sometimes disturbing, but hauntingly beautiful short stories. As modern fairy tales, they explore the frailties of the human condition, depicting the lowest depths in men and women – the despair under a thin veneer of civilisation. Long before Berlin Alexanderplatz, but written with the same radical spirit, Döblin’s short story collection, published in 1913, is uncompromising in its illustration of the human capacity for extreme forms of behaviour.

The title story is a wonderful example of the author’s keen eye for the revealing power of the grotesque: for no apparent reason a businessman, Michael Fischer, attacks a buttercup with his walking stick and subsequently builds up an introverted love-hate relationship with the plant. Fischer feels guilty and yet also wishes to assert his authority over the plant. What in the beginning emerges as an utterly trivial event becomes a manic obsession, resulting in more flowers being destroyed.

While the tale of the buttercup is inevitably somewhat comical, the story ‘The Dancer and the Body’ is told without the slightest hint of irony or satire; its fascination lies in its cruel and depersonalised description of a young woman’s self-hatred. Ella, who is only nineteen-years-old and an accomplished dancer, develops a fatal, unexplained illness after having disciplined her body with extreme exercise and sheer will power. The strict separation between identity and body – the latter being nothing more than a troublesome, defunct ‘piece of meat’ – seems to be the only way for her to maintain control, giving her a feeling of superiority over her mother and her physicians, as well as other patients.

Although the stories are not connected – in fact, they stand out through constantly changing themes and tones – they share certain topics which are crucial for Döblin’s entire literary production. The correlations between vitality and aggression, sexuality and violence, turn out to be as characteristic for the works that follow this collection as the blurred boundaries between normal and pathological behaviour. Having specialised in the treatment of nervous diseases as a doctor, Döblin’s narrative style comes close to the principle of exact psychiatric observation and has lost nothing of its power to stimulate and provoke.

Comparable in stature to contemporaries like Thomas Mann, Robert Musil or Franz Kafka, the revival of this unceasingly inventive author started only recently and is still ongoing. Fischer Verlag, Döblin’s literary home before 1933, has been republishing modern volumes of almost his complete oeuvre in German since 2008, and English translations will surely follow. His early short stories with their anti-heroic protagonists and open endings are captivating from the word go and will attract those looking for an extraordinary reading experience.

Alfred Döblin (1878 – 1957) is one of the most important Germanspeaking writers of the twentieth century. As a radical literary experimenter, he is most commonly remembered for his novel Berlin Alexanderplatz, a masterpiece of European Modernism and regularly considered to be among the best books of all time. But already before its publication in 1929, Döblin’s unique literary voice had been recognised within the cultural debates of the Berlin avant-garde. His adventurous narrative approach made him an inspirational figure for the rising generation of the 1920s, showing the modern era in all its polyphony. As the son of assimilated Jews, Döblin was forced into exile at the beginning of the Nazi dictatorship and spent several years in France and the United States. His oeuvre spans more than half a century and takes in a wide variety of literary movements, styles and genres – from historical novels to science fiction, to stories about the modern metropolis.