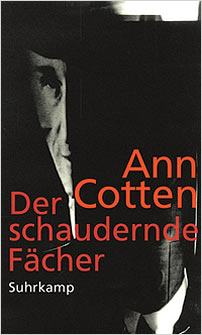 The Quivering Fan is a collection of short stories which blend philosophical reflections on the interconnectedness of love, desire and art with spirited characters whose openness and curiosity bring these themes to life.

Ann Cotten’s writing moves with hypnotic ease between lighthearted topics and the consideration of fundamental questions about how we inhabit the world. Her whirlwind creativity encompasses music, sex and artistic ambition, via reflections on embarrassment and the role of art in people’s lives. Along the way she pauses to consider how someone’s hair moves in the wind, to muse about the ways in which conservative societies regulate the gaze, to look at garden gates and to scrutinise the place of cats in the history of art. Cotten generates new metaphors by the bucketful which resonate with the reader long after each story has come to an end.

Almost every story in The Quivering Fan is a love story of sorts, but there is nothing conventional about them. The seventeen short stories share the same young female narrator who features alternately as the desirer, the object of desire or the one refusing the pull of desire.

Cotten portrays desire as the single most driving, elusive and vexing experience in our lives. Each story has its own take on desire, narrating a single transitory moment in the narrator’s relationship with another man or woman. In ‘The Green Peacock’ two women compare notes on how they were attracted to men that they had either no good reason to like or felt compelled to like against their better judgment. In ‘Death’s Stupid Brother’ the narrator unexpectedly embarks upon a lesbian one-night stand while simultaneously investigating her philosophy of love. Ann Cotten’s latest work is intelligent and unusual, achieving the feat of being genuinely daring without the need to shock.

Ann Cotten was born in 1982 in Iowa and moved to Vienna in 1987, and Berlin in 2006. She studied German and wrote her thesis on Concrete Poetry. She made her literary debut in 2007 with her book Fremdwörterbuchsonette, for which she was awarded the Reinhard- Priessnitz Prize. In 2008 she received the George-Saiko-Reisetipendium and the Clemens Brentano Prize for Literature in the city of Heidelberg.