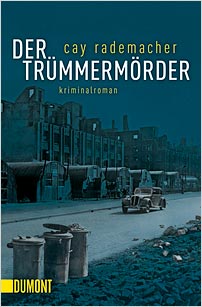 A compelling read, and as much a historical novel as a crime novel, The Rubble Murders recreates life in post-war Hamburg under the British occupation. Rademacher engages all of the reader’s senses with writing that is both visual and persuasive. The characters are complex and distinct, while rich concrete details bring the text to life.

The year is 1947 and Hamburg is in ruins. The corpse of a naked young woman is found in the rubble. Police Inspector Stave is assigned to the case. Maschke from the vice squad and Lt MacDonald from the British occupation force join his team. No one reports the missing woman; nobody has seen or heard anything. Then three more bodies are found: two women, an older man and a girl, all of them naked, all of them strangled. There are many twists and turns, plenty of false leads and gripping subplots.

The reader sees Hamburg through Stave’s eyes and learns about his personal life. Stave’s wife has burnt to death in the Operation Gomorrah bombing of 1943. He wakes up searching for her body next to him, until he remembers that she’s dead. And Stave’s son is missing, having volunteered for the Wehrmacht as an idealistic seventeen-year-old.

The case seems impossible to solve. All appeals to the population, plastering Hamburg with the victims’ photographs, yield no results. During a visit to a Jewish orphanage Stave notices a little girl’s reaction to Maschke. Anouk is one of the few survivors of the Oradour-sur-Glance massacre that took place in Normandy on June 10, 1944. Stave discovers that Maschke’s real name is Herthge. As a member of the Waffen-SS, Herthge participated in the atrocities that annihilated almost the entire village. At the end of the war Herthge took on the identity of a neighbour missing in the war to cover his tracks. Stave puts the pieces of the puzzle together and identifies Maschke/Herthge as the serial killer. The victims were a Jewish family waiting for passage to Palestine. They had recognized Herthge from the massacre, and Herthge had to kill them to keep his cover.

The story is gripping, the language forceful, the setting absorbing. Based on a real case, but one which was never solved, Rademacher tells a unique story from a unique perspective – people who have lost the war, their homes, their city and their feeling of self-worth. A spine-tingling portrayal of how the defeated interact with their victors.

Cay Rademacher was born in 1965 and studied Anglo-American history, ancient history, and philosophy in Cologne and Washington. He has been an editor at Geo since 1999, where he participated in establishing the history magazine Geo-Epoche. He served as the magazine’s managing editor until 2006. Rademacher’s most recent books are Drei Tage im September and Die letzte Fahrt der Athenia 1939 (2009). Cay Rademacher lives with his wife and three children in Hamburg.