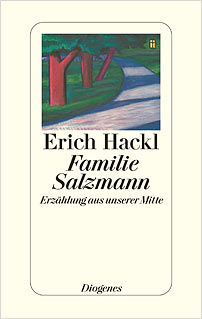 A deeply moving account of life in difficult, often lifethreatening, circumstances, this accomplished ‘family chronicle’ examines different generations’ responses to the Third Reich and its legacy. With a grand sweep of action, characters and eras, it emphasises the need for crossgenerational communication and understanding.

The Salzmann Family tells the story of three generations of a German-Austrian family in the twentieth century. The main section of the narrative documents the family’s history and is framed by the present-day account of the youngest member of the Salzmanns. Hugo Salzmann’s activities in the Communist Party make him a prime target of National Socialist persecution. He marries Juliana Sternad and their son is born in 1932. Forced to flee their home town, in 1933, the family escapes to Paris where they live in the exile community until Hugo is arrested. Juliana manages to send their young son back home to her sister Ernestine. Shortly afterwards Juliana is arrested and is sent to Ravensbrück, where she dies of typhoid. Hugo, meanwhile, is tried for treason and given ten years’ hard labour. Their son, also Hugo, is brought up by Ernestine who fights to protect him from deportation.

After the war, the young Hugo goes to live with his father, who has a new wife and daughter. However, Hugo is continually disappointed by his father’s refusal to talk to him either about the past or about his mother. Hugo emigrates to East Germany where he is pursued by the Stasi and suffers a mental breakdown. Following his recovery he marries Herta Heinrich and their first son is born in 1959 with severe physical and learning disabilities. The couple’s disillusionment, particularly with the state provision for their son, leads them to flee East Germany for Austria, where again they suffer distrust by a society which assumes they must be East German spies. This major section of the narrative is framed by the contemporary experiences of Hugo and Herta’s youngest son, Hanno. After he admits that his grandmother was killed in a concentration camp, Hanno becomes the victim of anti-Semitic bullying at his workplace.

Pervaded by a profound sense of melancholy and loss, though punctuated by moments of humour and hope, Hackl’s novel ends on a note of resignation, as Hanno’s fate shows that man’s propensity to violence and discrimination continues, despite the lessons of twentieth-century history.

Erich Hackl Born in Steyr, Austria, in 1954, Erich Hackl studied German and Hispanic Studies and worked for a number of years as a teacher and editor. He now works as a writer and translator in both Madrid and Vienna. Both his literary work and journalism are concerned with finding connections between those unable to come to terms with current injustice and others who wish to share the indignation that they have felt in the past. His stories, translated into twenty-four languages, are based on true stories. He has been the recipient of several prizes, including the Aspekte Literature Prize (1987) and the Austrian Book Prize for ‘Tolerance in Thought and Action’ (2004).