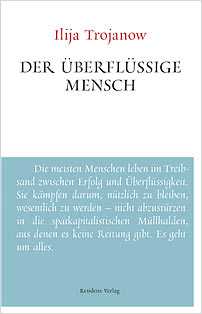 Ilija Trojanow’s well-researched essay poses the question of who in our society is superfluous, in the context of the overpopulation on our planet.

The title of Trojanow’s book recalls the Russian expression lishniy chelovek, ‘a superfluous man’ – a literary concept from the 1840s and 1850s based on the Byronic hero. While the Russian idea of the superfluous man refers primarily to affluent individuals who seem to have no place in society and are often idle and cynical, the superfluous man in Trojanow’s terms could be anyone who does not produce or consume goods, that is to say anyone who does not actively participate in and contribute to the predominant latecapitalist system in which human existence is reduced to, and even substituted by, consumption.

Trojanow refers to the infamous history of the French frigate from the Napoleonic Wars, the Méduse, which ran aground leaving survivors reliant on dwindling rations with little option but to throw overboard the weakest among them or to resort to cannibalism. Trojanow compares the contemporary socio-political landscape to the wreck of the Méduse, in which the weakest are still being thrown overboard, while the powerful elite are convinced of their indispensability and continue to believe in their superiority. Trojanow situates his persuasive argument in an extensive context encompassing contemporary neoliberal labour market policy, the ruling oligarchy and questions of ecological sustainability as well as the continuous pressure for self-improvement and the apocalyptic scenarios promoted by the mass media. He draws on a wide range of world events to illustrate his discussion, including Ireland’s Great Famine, the staff suicides at France Telecom, the 2013 Stockholm riots and the Kimberley mine in South Africa. Ultimately, the author suggests that practicing empathy is the most effective form of opposition to the bitter reality of the superfluous man.

With its accessible style and committed, polemical tone, this essay will appeal to a wide readership interested in social injustice and the current political landscape. While there is certainly no shortage of books critiquing the neoliberal condition, the perspicacity of The Superfluous Human and its highly engaging and informative style make Trojanow’s book stand out.

Ilija Trojanow was born in 1965 in Sofia, grew up in Kenya and now lives in Vienna. Trojanow has received numerous prizes, including the Adelbert von Chamisso Prize 2000, the Prize of the Leipzig Book Fair 2006 and the Berlin Literature Prize 2007. Apart from his extensive literary work, Trojanow has also published essays and reports on global political and cultural topics.

Residenz Verlag was founded in 1956 in Salzburg. Early publishing lists concentrated on fine art and non-fiction titles. During the 1960s a fiction list was added, and leading Austrian authors including H.C. Artmann, Thomas Bernhard, Barbara Frischmuth and Peter Handke published their first work here. German and Swiss writers were gradually included, followed, in the 1980s, by international authors in translation. The non-fiction list includes books on contemporary history as well as monographs of nineteenth and twentieth century artists and books on music, theatre and architecture. Since 2001 Residenz Verlag has been publishing literary and artistic picture books and fiction for young readers too, in the Nilpferd imprint.